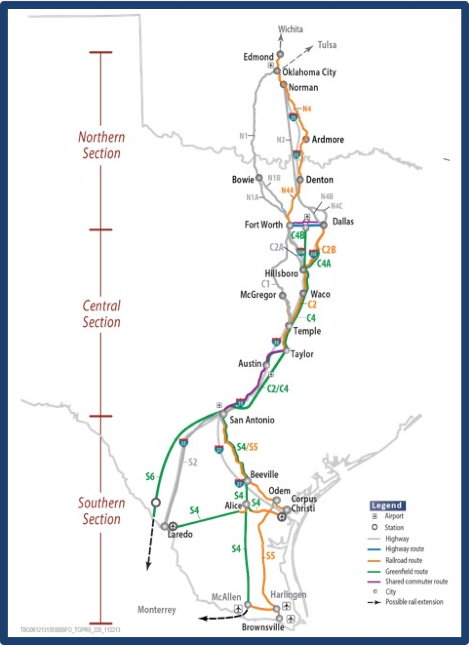 There’s a plan in the works to set up a High Speed Rail service from San Antonio to Mexico City and both sides of the border are working toward that goal.

Earlier this month the proposal saw the wheels start to move, much like they did in the days of the locomotive steam engine and the man at the controls on the U.S. side is Laredo Congressman Henry Cuellar.

He said that in 2008 there was a piece of legislation from the federal government through the state would look at (in determining) the feasibility of putting a fast train in different parts of the country. The one in our area would go from Oklahoma City down to San Antonio.

“With all due respect to San Antonio, things don’t stop in San Antonio. They go down to the border. So, I added an amendment that would also look at the area from San Antonio to the Texas border,” he said.

With the addition of the amendment the Texas Department of Transportation (TxDOT) is actually going down from Oklahoma City down to the border. It could be down in the Valley, the McAllen area or it could be in Laredo.

Talking with La Prensa, Cuellar said we’re in an awkward position at this point because we’re playing catch up with the Mexicans.

“The Mexicans are actually ahead of us, because of the governor of Nuevo Leon, they have a Presidential Permit for cargo. We’re looking at passenger here, also,” Cuellar said. “More importantly, they have the right of way already secured. It’s not like they have to buy it and look for it. They already have it secured from Monterrey to the border, so they’re ahead of us on that”.

On the Texas side, Cuellar said the ball is the hands of TxDOT, the experts that have to deal with right of way. As Cuellar understands it, a lot of congestion exists in the areas from Oklahoma, Dallas and Austin to San Antonio, so that may be a little more complicated.

“Based on conversations with TxDOT the area from San Antonio to Laredo could probably be done faster than the other areas,” he added.

The new aspect of this project recently revealed is to extend the High Speed Rail to Queretaro and then down to Mexico City, an idea from Cuellar’s Mexican counterpart Congressman Marco Antonio Gonzalez.

“They want to go from Mexico City to Queretaro and from that area you can connect to Monterrey and then to Laredo and San Antonio,” Cuellar explained. “If everything goes fine, keep in mind that President (Enrique) Peña Nieto is moving pretty quick and he wants to get a lot of things done.”

In the explanation from Cuellar, he said Peña Nieto and the Mexican Congress are making major reforms. They’ve tackled education, labor and energy. One of the reforms they’re looking at seriously is railroad reform.

“One of the things they’re going to allow (presently) is for four major companies to do all the railroad and they want to change that to provide more competition,” Cuellar said. “One of the things they want to allow is private investment. That has an impact on this part because the Mexicans want to have the private investment work with the state to help build that line from Monterrey to the border at the Laredo area.”

Presently a feasibility study is underway. This being made possible following a meeting with U.S. Transportation Secretary Anthony Fox and Cuellar said they asked for an additional $400,000 to complete the actual study from the border down to Monterrey.

“By December of this year they should finish the feasibility and see what comes out of that for our side,” Cuellar said.

“Knowing that there’s going to be a lot more improvement in commerce and trade between the U.S. and Mexico I think this is one that will help us with the two economies, the Monterrey economy and the San Antonio/ Laredo economy, and surely the U.S./Mexico (overall economy),” he said.

This is the first-of-a-kind international passenger rail line. There’s one that goes through Montreal but this will the first with Mexico.