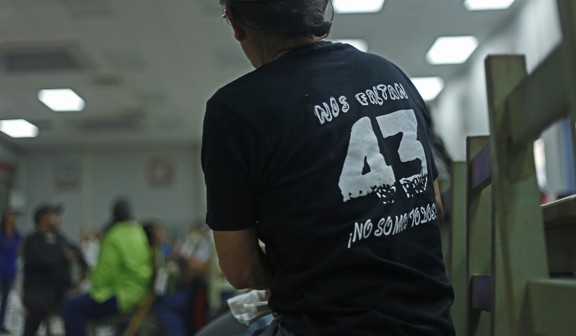 EL PASO — Blanca Luz Nava Vélez gripped the tissue with both hands as if it were about to float away from the tears forming in her eyes as she forced herself to speak through the shake in her voice to say that even if the world were to end she will find her missing son Jorge and the 42 other students kidnapped in Ayotzinapa, Mexico, on September 26.

“When I am at home, I want to die,” she said. “I feel like dying because I see the items that belong to my son, his guitar and I would go mad. That’s why I am doing something about what happened.”

Speaking at a forum at the University of Texas at El Paso, March 17, she said she finds comfort and consolation when she gathers with the other families who are trying to find their missing sons. Being with the families and staying at her son’s school is better than being home, she said.

Nava Vélez along with other parents and supporters have protested and demanded that the Mexican government find the missing 43 students. She says that the parents have been outside the Mexican presidential palace through the rain and cold demanding justice only to see the gates closed in their faces.

Nava Vélez along with Josimar de la Cruz Ayala and Stanislao Mendoza Chocolate for a caravan of three traveling through the southwest of the U.S., up to the northwest and back down to Colorado. They are one of three caravans supported by an extensive coalition of U.S. organizations from California to New York. According to Cruz Ayala they are coming to the U.S. seeking solidarity from church groups, students and communities from more than 40 U.S. cities. There are 11 caravan participants; three stayed in Mexico because they were not granted visas to enter the U.S.

Nava Vélez , Cruz Ayala and Mendoza Chocolate marched, protested and demanded justice in front of the Mexican consulate here along with supporters from this community. The group was well received by forums at the Centró Sin Fronteras, Café Mayapan, the University of Texas at El Paso (UTEP) and St. Mark’s Catholic Church. There they shared their pain, frustrations and hopes and related the efforts that the community in and around

Previous Post PadreCare: Keeping seniors on track with their meds doesn't have to be a pill-of-a-chore
Next PostCrowdfunder: Bringing hope and color to violence-ridden Colombian city

PadreCare: Keeping seniors on track with their meds doesn't have to be a pill-of-a-chore
Comment
Crowdfunder: Bringing hope and color to violence-ridden Colombian city