From Romanian immigrant to hybrid artist in Juarez, Mexico 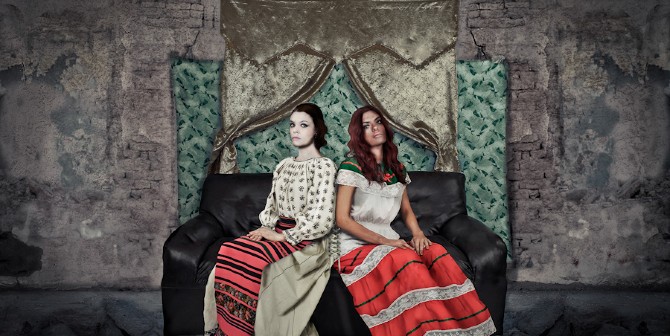 JUAREZ — The photograph is a self-portrait. But it shows two women — two manifestations of the same woman, a woman who calls herself a hybrid, a dislocated immigrant who still feels at home in a strange new land as she attempts to uncover her own special identity.

“I experience a kind of dislocated identity, which I think it’s very common in migrants; feeling like outsiders,” said photographer Sabina Loghin who emigrated from Romania to Mexico when she was four years old.

Far from resenting the lack of a visible community from her home country in Cd. Juarez, Loghin embraces her unique hybridization, and acknowledges it as the main inspiration for her art.

Loghin said she cherishes the benefits of living between cultures. “It can be hard, but it helps you to be more versatile when you visit foreign places. It makes it easier for one to adapt to whatever changes.”

“What attracts me is one’s own crisis. In my case, it is my diffused identity.” Through her photography, Loghin depicts what she calls a “culture hybridization” between two societies very different from each other, and which, nevertheless, can be found in her own family’s life story.

“If I hadn’t grown up here, I would be a different person,” she said, with an accent so typical of people of Cd. Juarez – which people refer as ‘golpeado,’ – that, at first it is hard to believe that she was born in a place almost 7000 miles away from the Mexican border. Only the brown gypsy eyes that dominate her face give her away. Her name too.

She was born in Transylvania, Romania, a place known in popular culture as the homeland of Dracula, and which has been long represented in films and literature as a land of mystery and magic.

it is no surprise that Loghin decided to honor her family’s artistic heritage by becoming an artist. Her parents were also artists – her father, Doru Loghin, a professional violinist who played for the Brasov Philharmonic Orchestra, and her mother, Mugurasa Loghin, a theater actress.

Loghin and her family emigrated to the capital of Chihuahua, where her father was offered a position in the city’s orchestra. The Loghin family spent 12 years there before moving to Cd. Juarez, where Loghin’s father was hired in the in the newly created music department of the Autonomous University of Ciudad Juarez (UACJ) . After eight years of living in the borderland, Loghin said they have learned…