The Mextasy of William Nericcio dashes stereotypes and builds ‘mexicanidad’ 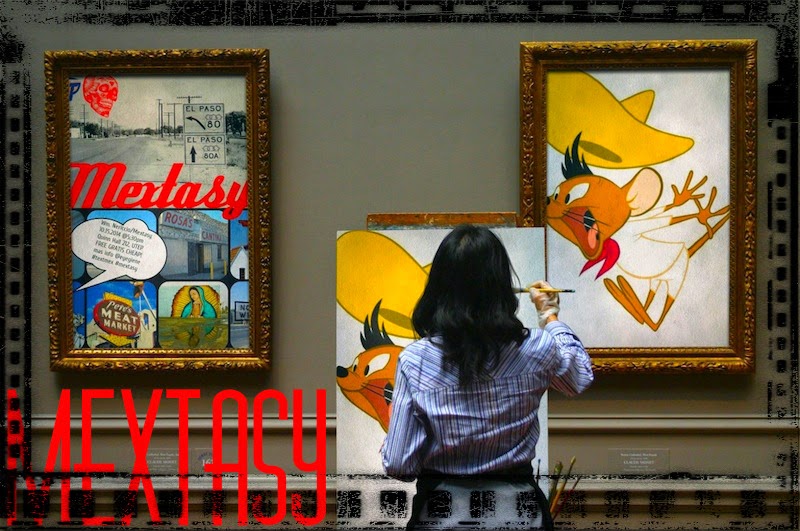 EL PASO— The Mexican experience in America, presented with verve as a celebration of the culture and and as a bulwark against negative stereotypes in popular art and media was dubbed Mextasy by Dr. William Anthony Nericcio.

Nericcio captivated a room of faculty members and students when he came to the University of Texas at El Paso recently to discuss and present his travelling art show,

The Mextasy pop-up exposition contains objects that Nericcio has collected over the years, Ranging from dolls to posters that harken back to the 1950′s representing and satirizing the Mexican experience in the United States, representing an analysis of Hollywood’s contribution to perceptions of Mexican ethnic identities.

Nericcio gets serious when addressing how consumers should fight the negative commentary on Mexicans that some commentators in media like Rush Limbaugh and Anne Coulter advocate.

For Nericcio, Mextasy can be seen as a form of defense and cure against those Mexican stereotypes and tropes. Presentations like Mextasy can heal society just like creating the art healed Nericcio.

“For me, a lot of this work, this artwork is recuperative.” Nericcio explains, “It’s me paying for my sins, and trying to imagine another way of being in touch with my innerMextasy.”

Nericcio, a Texas-born professor of Chicano Studies and Latin American Studies, English and Comparative Literature at San Diego State University, explains that the origins of the title Mextasy come from the word…

bicultural, binational, Chicano studies, Mexican
Previous Post Colombia has 3 of the world’s best preserved natural parks
Next PostUrban Farmist: Giving thanks to those making a "sustainable" difference in our communities

Colombia has 3 of the world’s best preserved natural parks
Comment
Urban Farmist: Giving thanks to those making a "sustainable" difference in our communities