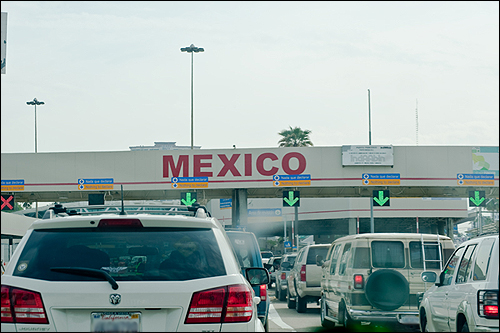 More than 30 people are believed to have been killed in coordinated attacks on Brussels airport and a central metro station. According to news reports, Isis has claimed responsibility.

Speaking on Fox and Friends on the Fox News Channel, Trump, the GOP’s frontrunner for president said via telephone: “I would close up our borders until we figure out what’s going on.” He later modified his comment, telling CBS This Morning, “I didn’t say shut it down. I said you have to be very careful. We have to be very, very strong and vigilant at the borders. We have to be tough.”

Former Hidalgo County Judge J.D. Salinas chairs the Texas Border Coalition. President Obama appointed Salinas a regional director for the General Services Administration during his first term of office. Salinas said in response to Trump’s remarks: “Closing our land border with Mexico would be a ridiculous staging of security theater: the practice of false efforts intended to provide the feeling of improved security while doing little or nothing to actually achieve it.”

In a statement, Salinas added: “Since Sept. 11, 2001, the United States has made unprecedented investments in protecting the Southwest Border from the illegal entry of people, weapons, drugs and contraband. Those investments include personnel, technology and infrastructure. The story of the men and women protecting the Southwest border is a success story: seizing more currency, drugs, and weapons than ever. The Southwest border security team needs more resources, not false efforts that harm morale and the economy.”

Westley is in the Republican Party runoff for Congressional District 15, an open seat that includes part of the Texas-Mexico border in Hidalgo County. Westley did active duty for seven years in the U.S. Army, specializing in logistics for light infantry units.

“What we have to do as a nation is think strategically. We have to be pre-emptive. If elected to office, I would have dialogue with our border governors, make sure the National Guard is prepared and that we have a plan of action in place,” Westley told the Rio Grande Guardian.

“Closing our borders is not realistic…

Finish reading Trump criticized after calling for U.S. borders to be closed

border security, featured, U.S.-Mexico
Previous Post Trump's rise in the polls is thanks to the one group who should have known better
Next PostNew Interactive Map Highlights Disparities in Medicare