LatinaLista — They call themselves the Border Bedazzlers and they have one mission — transform the ugly metal panels of the US-Mexico border wall into colorful art. 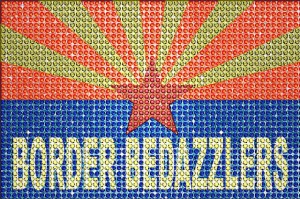 Spearheaded by Bisbee, Arizona artists Gretchen Baer and Carolyn Toronto, the duo work their talents in Naco, Sonora, Mexico, a town just on the other side of the Arizona-Mexico border. The two women chose to paint the wall from the south side of the border because they knew they would be hassled by too much red tape and bureaucracy from US law enforcement and federal authorities.

The result has been a 30-panel vibrant mural of different shapes and figures that magically spring to life in the Mexican desert. The colorful display is welcomed by the local Naco community, not just for the smiles it generates but because it is a binational art project. A project where the children of Naco have taken an active role in picking up paintbrushes and tapping their imaginations to create their visions of beauty on something considered an eyesore and a symbol of American mistreatment of Mexicans. 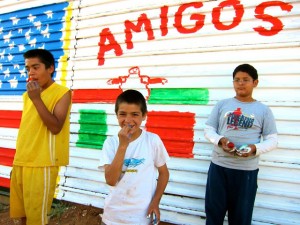 With over 2,000 miles of rusty panels separating Mexico from the US — stretching from California to Texas — the Border Bedazzlers have their work cut out for them. In an interview with the LA Times, Baer proclaimed that she and Toronto want to keep the project going for as long as they can. They also hope that other communities take the initiative to do what they are doing and paint the border wall that runs through their towns.

As their blog proclaims: If we can’t tear it down, let’s bedazzle it!

"Pay as You Earn” program to make student loan repayment easier for young people
1 Comment
Video: 21-year-old Argentinian raps about being an immigrant