Video: 21-year-old Argentinian raps about being an immigrant 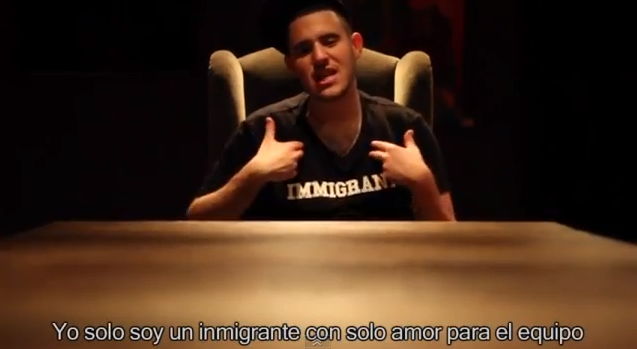 LatinaLista — Ever since immigration marches, deportations, DREAMer protests, Immigration and Customs Enforcement (ICE) raids and the border wall have become fighting words in this new era of civil rights, artists have put the pain and suffering of Latino immigrants into music, onto canvass, stage and film.

One of the latest artists to draw attention to the immigration issue through his works is a 21-year-old rapper known simply as Immi. A native of Argentina, who came to the US with his parents when he was 14-years-old, Immi began rapping at 16.

At that age, the pain of living in a new country, leaving behind his old friends and having to learn a new language was fresh. Yet, the pain of being the ‘new kid’ was coupled with the discrimination he witnessed against immigrants perpetuated by groups who didn’t understand the reasons why immigrants leave everything behind to bring their families and start a new life in the United States.

One of Immi’s first rap songs was Immigrant/Inmigrante. Sung in both Spanish and English, Immi partnered with songwriter and producer Gray Devio to produce a highly polished music video with a two-fold purpose: create positive awareness of the plight of immigrants and reinforce the message that perseverance is the key to fulfilling their dreams.

Immi released the song in November and so far it has attracted a lot of attention.

“The response has been really outstanding,” Immi emailed Latina Lista. “People have connected with this song and I am really proud of it. The most important is the feedback that I have been getting about the lyrics. The most common (comment) is ‘They are beautiful.’ I’m hoping people will keep sharing the song so it will end up on the radio for a bigger and diverse audience.”

Immi writes that he has two more singles coming out before the summer, both dealing with the immigration issue.