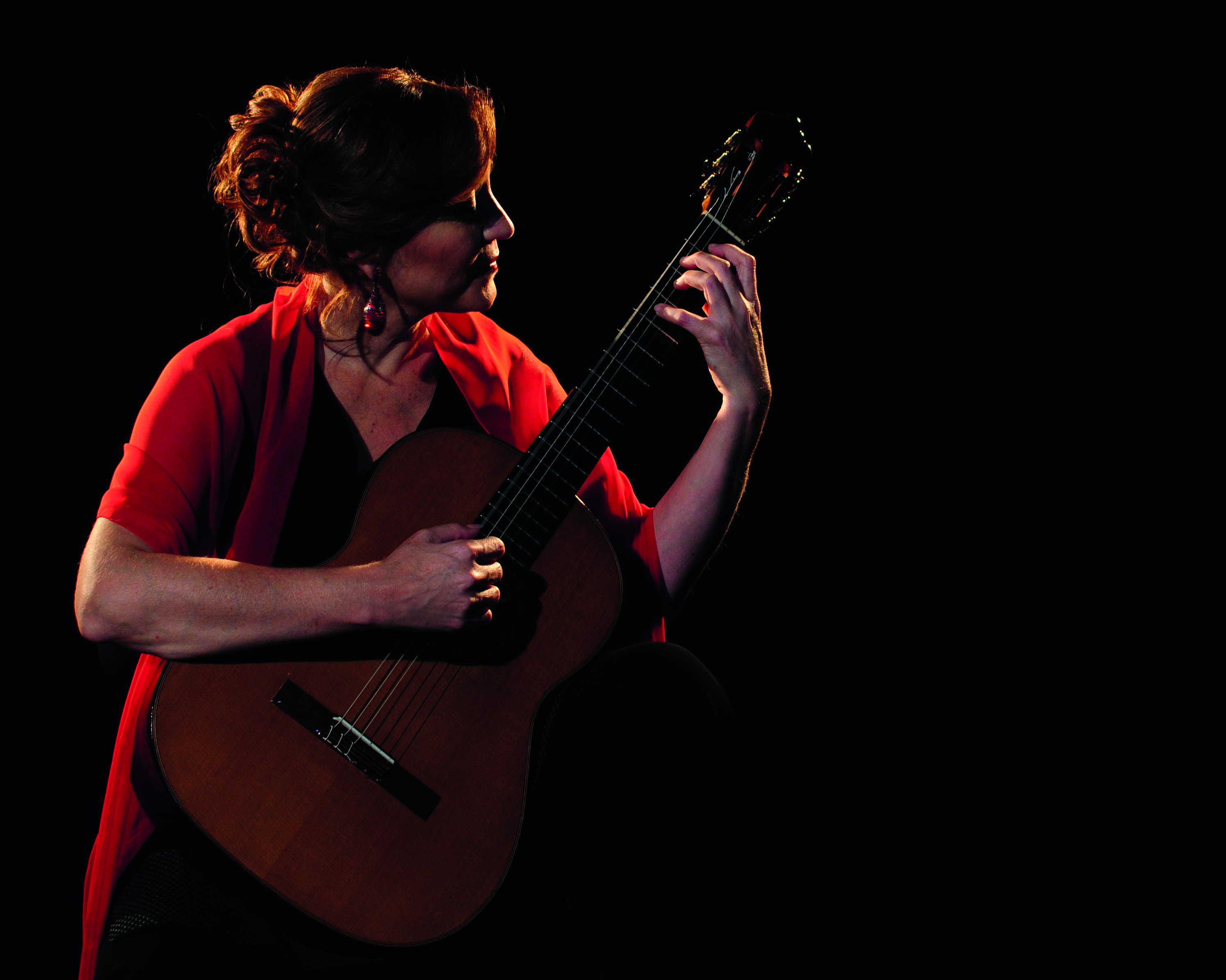 She has that fierce spirit of excellence. Like Rosie, the iconic woman portrayed in a WWII-era poster with the words “We Can Do It!,” – or perhaps: “¡Sí Se Puede!” – Berta Rojas is strong, emphatic, and inspirational. She is one of the top classical guitarists on the planet; and one of few women in a male-dominated artistry. And to crown such an amazing repertoire, she is a talented and proud Latina.

This Paraguayan – currently settled in Washington, D.C. – grew up in the bustling South American city of Asunción. Following what some would consider an impossible path.

Rojas is a cultural bridge builder. She has broken the rigid glass ceiling of classical music with an impeccable technique and innate mastery, presenting Latino pieces to an universal audience. And she has been doing that because “music should not have any boundaries because of language, heritage, or culture,” she said in a phone interview with Latina Lista from her home in D.C. “That is the beauty of music. Musical notes fly everywhere, touching everybody. It transforms people, communities and nations.”

Rojas, a Latin Grammy-nominated classical guitarist, is a professor of guitar at George Washington University in Washington D.C. She received a Bachelor’s Degree in Music at the Escuela Universitaria de Música in Uruguay. Later, she earned a Master’s Degree in Music from Baltimore’s Peabody Conservatory, and is artistic director of the Ibero-American Guitar Festival held at the Smithsonian Institution Museum of the American Indian in Washington D.C.

However, in the true spirit of reaching all people with her talent, she also created the first online classical guitar competition, the Barrios WorldWideWeb Competition.

Though she has a very full schedule, Rojas always has time to make music. Something she does in her latest album released Aug. 26 titled Salsa Roja.

“The colorful sounds, rhythms and styles of Latin America are part of Salsa Roja,” she said. “It is a musical journey with the exotic flavors that come from Cuba, Central America and every part of Latin America. It is an open window to showcase our roots, our unique passion to enjoy and do things; and of course, it has that twist of joy and nostalgia with an explosion of color. That is Salsa Roja.”

The CD brings 12 compositions, every single one “represents the vast musical diversity we have in Latin America,” she said. “And that is exactly what I wanted to do: Let the world enjoy our sounds while traveling to our beautiful cities and towns.”

Encompassing the various Latin rhythms and styles present in Salsa Roja is something that just a few classical musicians these days would be able to achieve. However, this Latina guitarist is absolutely fearless when it comes to portraying musical pieces close to her heart.

“Salsa Roja has a special energy,” she said. “One can listen and feel its elegance and warmth.”

Bringing hope, one musical note at a time

Education is a tremendous passion for Rojas and she has been very outspoken on the subject. “Education is so powerful. Dreams can be a reality with education,” she said, pausing briefly before adding: “And Salsa Roja also brings that face of music. I mean, the need to support arts, to protect our children with excellence in education.”

One of the compositions presented in Salsa Roja was a special collaboration with the Recycled Instruments Orchestra of Cateura, named after a poor neighborhood close to Asunción.

“This area is Paraguay’s largest landfill”, she explained. “And the beauty of music and education has changed garbage into arts.”

That magical transformation can be heard from the composition ¨Tambito Josefino. This piece was performed by Rojas, joined by the unique Cateura 19-member ensemble. “Talent does not know about limitations or poverty,” she said. “Music is a source of energy for these wonderful children”.

The dream does not end here, because Rojas is working to design what she hopes will be the Cateura Music School, the town’s very first music school with real instruments.

Rojas maintains a busy schedule of performing, teaching and recording, showing a piece of Latin America thru unique sounds and rhythms.

Thinking Out Loud
When Rojas is not performing on major stages such as Carnegie Hall, the Kennedy Center, London’s South Bank Centre or the National Concert Hall in Dublin, she likes to enjoy some delicious treats from her native Paraguay.

As a matter of fact, chipas are her weakness. “Lent means Chipas in Paraguay,” she said. “For me Chipas means tasting Paraguay, remembering my childhood.”

The chipas are a sort of cheese bun. Its name has Guarani roots. They are distinctive not only because they are made of cassava or corn flour, but also because the inside is chewy and moist.

“Social media is a great ally,” Rojas said. “I was craving some chipas and I posted on Facebook about it. Then, someone from Miami [Florida] contacted me, so she could send me some freshly-baked chipas. That is amazing!”

Policies, not brochures, key to solving obesity epidemic
Comment
Guest Voz: Texas — prime example of a state government failing its people and derailing its future, thanks to one man