Latina Lista: News from the Latinx perspective > Culture > Harlista: The coming of age of the Hispanic Harley rider

Harlista: The coming of age of the Hispanic Harley rider 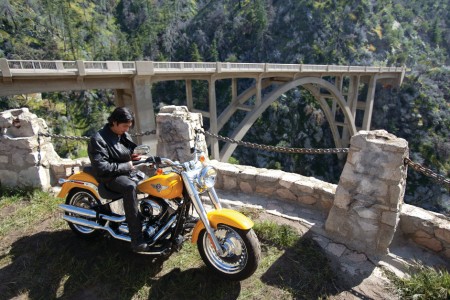 LOS ANGELES – My affair with Harley-Davidson motorcycles began when I was ten years old. My mom’s cousin’s boyfriend used to come visit and he rode a converted hawthorn green, chopped police bike. He would ride up the sidewalk, park the bike, and it took my breath away. That year I bought tall, ape-hanger handlebars for my bicycle . . . and so it began.

During my Brown Beret days I used to borrow my friend’s “Then Came Bronson” blue Sportster, rode my baby brother’s radical Springer rig, then 25 years later went to work at a Honda/Yamaha motorcycle shop. During that time, I had a 1951 pan head and my last one there was a small 883 that I won in a bet.

When I started riding way back in the day there were very few Latino/Hispanic motorcyclists. Coincidentally, our cousin’s boyfriend turned out to be Fat Freddie – one of the founding fathers of a famous motorcycle club from Oakland, California.

As a University Professor I have been accused of riding my hog to school. This is not true. I ceremoniously ride the bike only to turn in the grades.

For the fifth straight year, Milwaukee-based Harley-Davidson Inc. was the number one seller of new street motorcycles (all engine sizes) in the United States. This includes all bikes sold to young adults ages 18-34, women, African-Americans, Hispanics, as well as Caucasian men ages 35+.

The newly available data from Polk shows that Harley-Davidson experienced a double-digit market share gain from 2008 to 2012 in the U.S. with these customer groups. Harley-Davidson chief marketing officer Mark-Hans Richer attributes the company’s success to its unique purpose.

“We don’t just build motorcycles. We fuel personal freedom,” Richer said, “The desire for individual expression draws customers from all walks of life because it’s a universal, human value that transcends cultures, generations and history. It’s more than an adage that almost no two Harley-Davidson motorcycles are alike,” Richer said. “The same is true for our customers. Members of our community come from all different cultures, backgrounds, and generations and their shared attitude about life is the tie that binds.”

Several years ago, I was made aware of a documentary film entitled Harlistas: An American Journey that was shot by a good friend of mine, Claudio Rocha. I finally found my lost tribe. I just recently decided to talk to Harley to ask about them embracing the Hispanic/Latino enthusiast.

Once he finished graduate school, Garcia started his marketing career at Colgate-Palmolive in NYC in the Global Marketing Development program. He began working in sales, then global brand marketing for Oral Care. As an assistant brand manager in Home Care Marketing, he was responsible for introducing SuavitelFabric Conditioner to Latinas in the U.S.

Later Garcia spent five years marketing brands like Keystone Light, Extra Gold, and Coors Banquet to the general market. As of 2009 he led the marketing efforts of the Coors family of brands targeting the Latino consumer. His job was developing integrated, 360° campaigns supporting innovations and sports alliances with Coors Light equity to drive accelerated business growth.

Herald de Paris would like to thank Amanda Lee and Mike Roach for making arrangements for our Deputy Managing Editor Dr. Al Carlos Hernandez to dialogue (not ride with. . . yet) Harley-Davidson’s Roger Garcia.

Dr. AC: How did you hook up with Harley-Davidson? Riders like myself would consider that the dream job of a lifetime! What has been your history with motorcycles in general?

RG: In 2011, I was called by a recruiter with the opportunity to join Harley-Davidson as a Director of Outreach Marketing. I had started riding motorcycles in the summer of 2006 when I moved to Colorado, so I was already an enthusiast before I got the call from Harley. Given the chance to work for one of the most iconic global brands was a once-in-a-lifetime opportunity, so I pursued the position until I was hired in June 2011.

RG: Harlista is term that signifies community and bond among Latino riders that started over 50 years ago. Latinos across countries like Mexico, Cuba, Puerto Rico, Ecuador, Colombia, etc. have been calling themselves Harlistas for a very long time. We estimate there are close to two million Latinos who have expressed an interest in one day owning a Harley-Davidson motorcycle. This comes from internal research that we have done in the U.S.

Dr. AC: Tell us about the documentary. I know the cinematographer Claudio Roacha very well and this documentary was stunningly visual.

RG: The documentary film Harlstas: An American Journey was a project that Alfredo de Villa helped to develop. It follows the journeys of Latino Harley motorcycle riders as they seek adventure, camaraderie and the achievement of the American Dream. It was developed with real Harlistas who were cast from various parts of the U.S. with the help of our Harley-Davidson dealer network.

The film follows the journeys of four groups of Harlistas:

Dr. AC: The center of the film was about motorcycles and familial relationships, especially father to son. Tell us about the theme and how the film has been received over the years.

RG: Harlistas: An American Journey was the first-of-its-kind documentary and screened across well-recognized film festivals from L.A. to NYC. The documentary received many accolades, not only from Hispanic/Latino Harley owners, but also from
non-owners and non-Hispanic riders. It is based on human truth and the bonds that Hispanics hold to be true, like family, brotherhood, and hermanidad. It is now available on our website for anyone to view in its full-length version. Our dealers also have used the documentary to hold movie nights with their local Hispanic communities at their dealerships.

Dr. AC: Pictured in the film are some scary looking guys. How do you deal with the negative imagery of ethnic Harley riders?

RG: We focus on the positive aspects of the rider and their life experiences. We show the bond of father and son, and brothers, which are important aspects of the Latino community. Bonding and family are also an important part of the Harley-Davidson riding community.

RG: We seek to attract all Hispanics ages 18 and older. But we know most of our customers will buy a Harley-Davidson once they are more established with their personal life and have the disposable income and time to fulfill their desire for personal freedom.

Dr. AC: Who is the typical Latino Harley rider? Are they culturally product loyal or do they come to H-D off of Japanese bikes?

RG: Most of our owners are repeat customers who are loyal to the brand and appreciate all aspects of owning a Harley-Davidson. They especially know that a Harley is pallet for self-expression through customization and personalization.

There are no “typical” riders, just as there are no “stereotypes” as to who is a rider. We have blue collar workers, white collar professionals, and all types in between. We have young riders who are or were inspired by their fathers, uncles, and grandfathers who ride or rode Harley-Davidson motorcycles.

Some riders tell us they recall seeing or hearing their first Harley back in Mexico, Cuba, Puerto Rico, Ecuador, Colombia, etc. and were inspired by what Harley-Davidson symbolizes — Freedom.

Dr. AC: How did those Chopper-build-competitions help sales in the Hispanic community? Isn’t the Chopper thing a passing phase? When the economy collapsed there were tons of Harley customs on Craigslist.

RG: Harley-Davidson has been inspiring bike builders since back in the early years of custom choppers and we, in turn, have been inspired by what some of the legendary Latino bike builders have done. For example, we recently launched Seventy-Two which is a Sportster that harkens back to the early 70’s with mini-ape handlebars and big flake paint.

The name “Seventy-Two” was not only a physical inspiration but a design connection – that bike was born from the East L.A. Latino low-rider culture. Whittier Boulevard, aka route 72, was the birthplace of the low-rider culture and the Seventy-Two has elements of this infused into its styling – specifically the Hard Candy Custom paint which is bold and stylish.

This is one reason we chose the name Seventy-Two.

Dr. AC: There are Harley riding clubs in almost every county in the country. Are they inclusive of Latino riders or have Latino riders started their own clubs?

RG: The Harley Owners Group (H.O.G.) is our global riding community and is supported by our dealer network. H.O.G. represents all types of owners including Latinos, their spouses, and families. Harley-Davidson also supports one of the largest Latino motorcycle clubs in the U.S., the Latin American Motorcycle Association (LAMA).

Across the U.S. there are many additional smaller riding groups and we encourage riders to reach out to their local Harley-Davidson dealers to connect with other riders in their areas.

Dr. AC: Harley pretty much allows you to customize your bike upon purchase. There are all types of styles – is a Harley more of a recreational fashion accoutrement or just everyday transportation?

Dr. AC: Why should a Latino of any age buy a Harley and embrace that lifestyle?

RG: Harley-Davidson is more than a motorcycle – for many Latinos in the U.S., Harley-Davidson represents the achievement of the American Dream, which includes many personal and emotional achievements as well. You can read some of the many stories that Latino riders have submitted on www.harley-davidson.com/harlistas.

What is amazing about Harley-Davidson is that it brings people together from all walks of life, and truly unites all those who seek to fulfill their dreams of personal freedom.

From Central to South America, the Caribbean and North America, Harlistas share a rich and proud history.

Dr. AC: How can people find out more about Harlistas?

RG: We encourage anyone who wants to learn more about Harlistas to visit www.harley-davidson.com/harlistas. This is our online community within the Harley-Davidson website that gives current owners and new owners the space to share their passion for riding and to tell their story of how they have fulfilled their dream of personal freedom through Harley-Davidson.

This story is dedicated to John”Lindy” Hernandez and Ricardo Huerta, true to the game OG Harlistas.

Las Chicanas: “Their stories are important and need to be preserved”
Comment
Iowa School District Struggles With Teacher Diversity