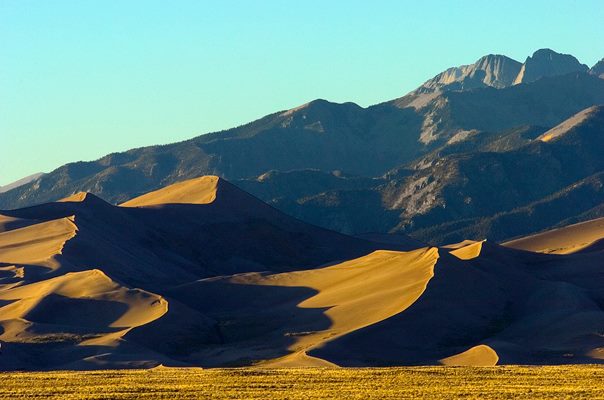 There are some American places where history overlaps and becomes so condensed, so close and nearly visible, that each layer is almost like its own separate lens.

Lorraine Gomez grew up in such a place.

Colorado’s St. Luis Valley is the world’s highest alpine basin, and one of its oldest, created by the great river that formed it thousands of years ago in the Sangre de Cristo Mountains. The Valley follows the Rio Grande south to New Mexico, where the river tumbles over the border and the two join the Camino Real in its long journey to Mexico City.

Gomez’s connection to the 120-by-75 mile valley stretches back to the Spanish farmers who settled the land before the Mexican Revolution. The communities they established have retained a strong and continuous Hispanic identity for generations (the term “Hispanic” refers specifically to Spanish-Americans in this region.)

Gomez is so deeply rooted in this valley that it defines the heart of her own identity as well, remaining her central reference point, regardless of whether or not she happens to be living there.

“It’s like a compass that’s a part of me,” she said. “And that actually allows me to go further and stay away longer – I don’t even get homesick because in a way, I’m always there.”

One valley, many histories

Gomez has a lot of company. Everyone in the San Luis Valley appears to have that compass. The air is thick with competing claims of ownership, legitimacy, and the contradictions of history. Ancestors are a defining issue in this region where identity is intertwined with land and ethnicity, and people locate themselves in terms of centuries.

They settled at different times, founded segregated towns with separate, often tiny schools located within just a few miles of one another, and told their own histories, allowing several versions to co-exist simultaneously.

The large land-holders are primarily Anglo, while most Hispanic landowners are small farmers, and very few Latinos (specifically, in the San Luis, Mexican-Americans) own any land at all. Several old Hispanic families are wealthy, but most struggle to keep their land.

However, Gomez was appalled, albeit politely, at the suggestion of open conflict.

“Oh no,” she said, “In most places that kind of rudeness would shame our families, but here it would shame our whole communities. We’re not raised like that – neither Hispanics nor Latinos.”

But things are changing in the San Luis Valley.

According to Gomez, they’ve been changing for almost everyone for a while, but the momentum of a transformative discovery accelerated her personal journey faster than she had anticipated. It was a discovery that changed the way she looks at herself and the world.

“Even before my sister confided in me, many of my generation had started calling ourselves Latino,” Gomez said. “But finding out my full and true heritage – that changed more than my identity. It changed the San Luis Valley for me too,”

What she discovered was that her grandmother was a slave. An illegal, Indian slave, tribe unknown, owned by an Anglo farmer in 1916.

Nothing has been the same for Gomez since.

Growing up in a segregated valley

Lorraine Gomez’s path began in the small town of La Jara, when it was still possible for a kid to make it to high school without knowing anyone who didn’t mirror himself.

“Of course hardly anyone did grow up like that. We were country kids. We had pick-up trucks. Very old pick-up trucks,” she laughed. ”You drove through the Valley when I was growing up – I’m 44, so it was roughly 30 years ago when older teenagers began to let me ride along – and you’d come to a town where everyone was Anglo, and I mean everyone. Then, five miles down the road, you came to a town where everyone was Hispanic, meaning no one else was allowed…then Anglo, then Hispanic, Anglo, Hispanic, all the way through. That’s the kind of message that speaks for itself.”

Gomez added that the strongest messages she received were not often delivered verbally.

“It wasn’t something anyone sat kids down to tell us, just what everyone grew up knowing: that it took everything we had, our tiny towns, small farms and churches combined with our history, to keep the Anglos …well, frankly, to defend ourselves from them.

“Latinos didn’t have their own towns, they were rarely able to buy land, they rented mobile homes and small houses, and they worked for large farmers – mostly Anglo farmers, but some, a few, Hispanic farmers,” said Gomez. “But this message wasn’t really about Latinos. It was much more about Anglos. I mean we worked for the Anglos too. I picked lettuce for them starting when I was twelve years old, because my family had lost its small farm. We kept the old house we had inherited, and that was extremely important to us – I always knew that we had been here for well over three hundred years before the Anglos arrived.””

Gomez paused for a long moment before she added one more group. She is still unaccustomed to including its members, even as they become increasingly significant to her. When she was growing up, no one had included the small settlement of Utne Indians who had been allowed to remain in a southern portion of the valley when the rest of their Nation was forced to a reservation in Utah.

And when did the Ute arrive?

The shortest period confirmed by Western scientists place the Ute in the San Luis Valley 3,000 years ago. The Ute’s own religious traditions date their presence from the Creation.

“I can’t tell you why we never thought about them. The truth is, I never gave any thought to the small reservation in the Valley,” said Gomez. “No one ever told me about them, I hardly ever even heard them mentioned that I can recall.”

Meanwhile, the Valley’s Mexican-Americans (“Latino” has refered specifically to them since the mid- 1960s, according to Gomez), were descended from Mestizo ancestors who had accompanied the Spaniards to present-day northern New Mexico.

Two and a half centuries later their descendents did not need directions home.

Most of the other Latinos who settled San Luis Valley had roots in the surrounding region, generally. Their ancestors had not come from Mexico: Mexico had come to them. They also were perfectly aware of their location.

The Ute had fought long and hard to prevent intrusion into the Valley, and weren’t fully conquered until near the turn of the 20th century, when Anglo settlers prevailed upon the federal government, which sent troops and constructed Fort Massachusetts.

Not all that long after the Ute’s final defeat, a 17-year-old Hispanic ranch hand was working alone, miles away from his San Luis Valley home, fixing fences along the New Mexico/Oklahoma border in the summer of 1916.

Young Gomez came upon a 15-year-old Native American girl, also working alone. Word has it that she was herding sheep, although this isn’t certain. Over several months, the two teenagers had occasion to meet again and again, although they were periodically called back to their respective ranches, one in Oklahoma and the other in New Mexico.

The girl told the boy she was a slave, bought and paid for.

The two teenagers fell in love.

Determined, the young couple made arrangements to escape, and that’s what they did.

One night they simply removed the boy’s fencing repair materials and tools from his wagon, hitched up his horse, climbed in, and drove away to the nearest train station. No one knows where that was. All Gomez knows is that her grandfather took his beloved to Denver and married her, then the two settled down in the town of his ancestors, La Jarta, in the San Luis Valley.

Everything else remains a mystery. Gomez’s grandmother never revealed the name of her tribe, or the circumstances of her enslavement. That her own tribe had sold her is essentially unthinkable, and in fact she never claimed that it had. Whatever happened was evidently too traumatic for her to discuss – and/or there could well have been political factors at play.

In any case, this is what Grandmother Gomez chose to share. Lorraine is pursuing the issue slowly, carefully, and in her own time and way.

“In the end, I was a Latina before I found out about my grandmother, because my experience in the world, my language and my identity here in this place and in America – in the world, actually – makes me a Latina,” she said.

Claire Marie O’Brien is a multiple-award winning journalist living in southern New Mexico. She has a Master’s degree in U.S History and has published scholarly work in The Great Plains Journal.

hispanic, history, latino, New Mexico, Ute
Previous Post Politician Olga Diaz: ‘What is Good for Latinos is Good For Everyone
Next PostJanuary 27, 2014: A date with destiny for Peru and Chile

Politician Olga Diaz: ‘What is Good for Latinos is Good For Everyone
2 Comments
January 27, 2014: A date with destiny for Peru and Chile