LatinaLista — One national trend that is getting scant attention in the media is the rise in number of Latino children in the U.S. The impact of this rising demographic hasn’t been fully explored as to what it will mean for educators, book publishers and toy and game makers when it comes to preserving/teaching the Spanish language among these children.

As it is, the majority of Latino families have children younger than 18. The US Census reports that 75 percent of Latinos speak Spanish at home.

Combine that with the fact that Latinos are the second largest group who intermarry with other cultures and that leads to a whole other statistic of mixed Latino families, with children whose lone Latino parent is also looking for ways to pass along appreciation of the Hispanic culture or Spanish language in their homes.

While there has always been a push to preserve Spanish speaking skills among Spanish-speaking children, more products are being introduced to not only reinforce those efforts but to introduce and build children’s Spanish language skills for those who don’t know Spanish.

Recently, two such products, different from one another in platform but with the same end goal to get children reading and speaking Spanish, were introduced.

Wubbzy’s Space Adventure is billing itself as the first Spanish/English app targeting families whose parents want their children to learn Spanish or maintain the Spanish they’re hearing at home. Based on the animated Nick,Jr. character WUBBZY, the app, co-produced by a husband/wife team, affords children the opportunity to switch from English to Spanish when listening to stories or playing the games.

“My wife is Hispanic and we had the idea that an app available in English and Spanish might be a good way to get my son excited about the language,” said Brad Powers, chairman of Cupcake Digital, the technology company that made the app. “When I was searching for Spanish language apps for him, I found there was very limited to no availability for the kinds of apps he would like. We recognized a need, and felt it was a choice we wanted to give consumers.”

With the app, children and their parents can also listen to the bilingual stories in one of three modes, play mini-games within the story, sing along with original music videos that are taken from the series and even electronically color scenes from the series, learning their colors in Spanish along the way. The app is available on iTunes and retails for $1.99.

Parents wanting to pass on Spanish speaking skills to their children via reading isn’t new. In 2008, Latina Lista interviewed Nicaragua-born Christianne Meneses Jacobs who was on a mission to keep Spanish alive for her children. Jacobs felt strongly that her daughters not ignore their Latina roots.

“As the parent of two bilingual, bicultural, biracial children, I feel strongly that I must expose my daughters to the beauty of the Spanish language and the richness of Latin American culture,” said Christianne Meneses Jacobs.

Jacobs went on to found Iguana Magazine, one of the first original Spanish-language publications of high-quality Spanish literature specifically for children. Her magazine garnered awards over the years and favorable comparisons to another high-quality children’s publication, the English-language magazine Cricket. 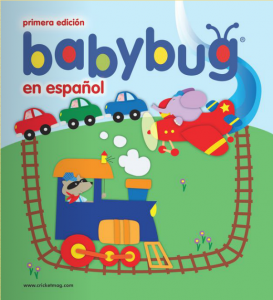 Last year, Cricket acquired Iguana Magazine in a business strategy that testifies to the fact that some are noticing the unique wants of Latino parents for their children, not to mention new business opportunities.

In addition to Iguana, the Cricket group wants to start with even younger potential Spanish-language readers and is launching in May a Spanish version of their 24-page, durable Babybug magazine, for ages 6 months to 3 years.

Whether it’s bilingual apps, Spanish-language books or bilingual cartoons and children’s shows, the rise of the Latino child is a statistic that will be increasingly hard to ignore by all in the future.