Guest Voz: Watching America — through the eyes of young immigrants 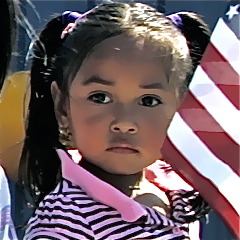 Two very small girls waited for a 4th of July parade in a small Midwestern city a few years ago. The city’s economy is based upon a large, fluid workforce from throughout Central America – a majority of them Mexican – and an industry which has for decades been specifically recruiting workers who lack documentation. I can’t claim direct knowledge of current conditions, but I can report that in 2010, when I took these photos, an unusally thuggish, even singular, brand of racism permeated the culture of the city and surrounding region.

The two little girls stood like sentries, about halfway down the block from their family group, The expressions on those small faces immediately stunned me, stopping me in my tracks. Whatever they were focused on was most certainly not a parade. In fact, they were intently watching a couple of white families who were spread out on the wide sidewalk in front of them. The Anglos had essentially displaced the extended family of Latinos, a sure sign that the latter were recent arrivals: within six months or so, they would stand their ground. 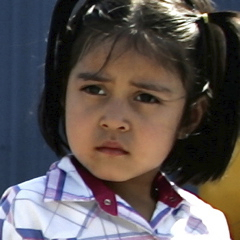 The displacement had happened almost organically, without a word exchanged – and something very like it had probably already occured at least twice that day.

The two girls hadn’t followed their family, although they had moved well back on the sidewalk, behind a large sign and were now standing about as close together as two people can stand. The adults glanced over at their children frequently, but did not summon them. Three or four passing children swooped around the girls, bending to sweep up the wrapped candies that littered the ground.

The little girls maintained a gaze truly remarkable in both intensity and longevity…It seemed to me at that moment, as it does now, that theirs were the eyes of generations of Latino people, US citizens or not, who have been watching America for two centuries.

Their gaze reflected a dawning recognition of what they were not yet old enough to understand. It might very well have been an ancient memory, passed down to them from ancestors whose ghosts were likely to have been hanging about, attracted by the prospect of a parade. 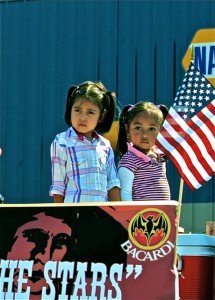 These people don’t behave themselves like other people do

They haven’t learned their manners, and they let their kids be rude

They left their old Abuelo way back there in the street:

I hold my Abuelo’s hand, and help him rest his feet.

Hector gasps in shock at this ( He’s my middle brother.)

When my Papa has no more, they put him behind bars.

Maybe we could show them there are Papers at the store –

That way, when they’re hungry, they can go and get some more.

I used to pray we could go home; but now we need to stay.

Without us here, they’ll never learn the right way to behave!

ALL PHOTOS AND TEXT /CLAIRE O’BRIEN

Latina Lista contributor Claire O’Brien is an award-winning journalist based in New Mexico from where she writes of the people, history, places and politics she encounters from the Midwest to the Southwest.

children, featured, immigrants, Mexican, parade
Previous Post The rise of the Latino child prompts more efforts to preserve Spanish in Hispanic households
Next PostEarth Day 2013 should serve as the beginning of an environmental panic attack