LatinaLista — If it’s February it means two things — Valentine’s Day is near and it’s time again to pay extra attention to keeping our hearts healthy. 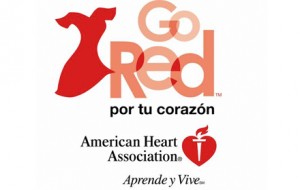 For Latinas, it’s doubly important. According to medical experts, Latinas are likely to develop heart disease 10 years earlier than other women. What makes the news deadlier than it has to be — because heart disease can be prevented — is that most Latinas aren’t even aware of the scary statistic.

That’s why February is set aside as the month for all matters of the heart. Today launches the American Heart Association’s annual Go Red campaign to highlight and raise awareness about heart disease in women. Since 2004, one visible reminder of the Go Red campaign has been National Wear Red Day.

From just wearing the recognizable Go Red campaign pin (which you can get for free) to tying on a red scarf or wearing a complete outfit in red, the National Wear Red campaign serves as the biggest billboard reminder for a disease that is still going strong. In fact, though today, February 1, is the official day to wear red, the campaign itself actually started on January 7 and goes till February 28, 2013.

Like most health campaigns, the American Heart Association (AHA) wants to target Latinas, as well as non-Latinas, so they set up two sites — Go Red for Women and Go Red por Tu Corazon.

Yet, UNLIKE most campaigns, the AHA understands that to be totally relevant with today’s Latina population, the ‘other’ site can’t be only in Spanish. The Latina population is bilingual, with many having varying degrees of comfort in either language. But just because a site is not in Spanish doesn’t mean that English-speaking Latinas don’t want to learn about how the disease specifically impacts them, or see images that they can relate to or find familiar recipes that they serve their families as well.

So, the AHA launched two distinct sites for Latinas — one in Spanish and the other in English. In addition to the two sites, each site shares inspirational stories of women who have battled heart disease, offers a downloadable family medical history print-out to be filled out and shared with doctors and, as always, serves as an unbeatable resource on all the information you need to know about heart disease.

Finally, here’s a campaign that recognizes not all Latinas are the same — even if their hearts are in the same place.