LatinaLista — Among the cool benefits of the Hispanic Heritage Month is that there is a heightened effort to bring the history of Latinos to the national forefront. Museums across the country incorporate local Latino contributions into their exhibits. Yet, there was one contribution, among many, that impacted the nation, as well as Mexicans — the bracero program. 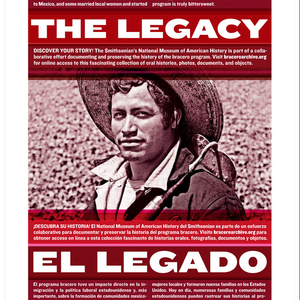 Facing labor shortages on the home front during World War II, the United States initiated a series of agreements with Mexico to recruit Mexican men to work on American farms and railroads. The Emergency Farm Labor Program, more familiarly known as the Bracero Program, enabled approximately 2 million Mexicans to enter the United States and work on short-term labor contracts.

The legacy, both good and bad, of the bracero program was for many years forgotten until museums and organizations started using Hispanic Heritage Month to resurrect this forgotten chapter of US history. One museum that highlighted this program was the National Museum of American History in Washington DC. In 2009, the museum created the bilingual exhibit “Bittersweet Harvest: The Bracero Program, 1942-1964.”

The intent of the museum was to always bring the exhibit out to the people, many of whom would never see it in DC. The Smithsonian Institution Traveling Exhibition Service (SITES) was charged with taking the exhibit on the road and they have been doing just that over the last few years.

However, there are just so many places the exhibit can travel, not to mention reach people. So, this Hispanic Heritage Month, in addition to continuing the travel exhibit the Smithsonian is taking it a step further by distributing 5,000 bilingual posters to schools, libraries, migrant education centers and museums.

Each poster deals with a different aspect of the bracero program and its impact on the nation and on the Mexican workers themselves. The hope is that the posters triggers dialogue and challenges perceptions that, unfortunately, still linger today about our southern neighbors.