Comic journalism brings one DREAMer’s story to readers in drawings

LatinaLista — The story of Jessica Colotl, the Kennesaw State University graduate, whose arrest as an underclassman, for being an undocumented student caused a nationwide firestorm among DREAMers, could easily be just another news story of an immigrant student fighting the nation’s deportation policy — if it weren’t for one thing. 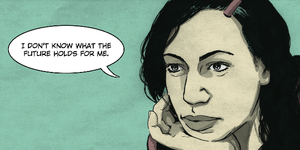 Unlike other news accounts of similar situations, Jessica’s story not only appeared in print and on TV but also in comic form.

While there’s nothing funny about what she and her family have gone through, the depiction of her story in the most basic form of storytelling has its writers and artists hoping that more people will read Jessica’s story and learn about who are DREAM Act students, like Jessica.

In a joint project between the Juvenile Justice Information Exchange (JJIE.org) and Cartoon Movement, Jessica’s story came to life in a full-scale comic journalism piece titled Jessica Colotl: Eye Of The Storm.

What helps make the comic format so unique is that quotes attributed to Jessica and other players in her story are highlighted in the typical comic speech balloon format. Also, because of the drawings and the concise text, it makes for quick reading — what its creators want readers to do so they stay interested in the story while learning about the issue.

“The comics journalism form provided a wonderful opportunity to put a face to the immigration issue,” said Ryan Schill, the comic’s writer and the assistant editor of JJIE.org. “Whatever side you take, it’s important to remember we are talking about real people with real stories. Seeing Jessica’s story through her eyes adds a powerful new dimension to the debate.”

The story is in both English and Spanish.