Over 20 years ago, when my friend Ana was brought to this country at the age of three, her Mexican parents were pursuing the American Dream. Today, at 24, Ana is still chasing it. Against all odds, she recently graduated from the City University of New York (CUNY). 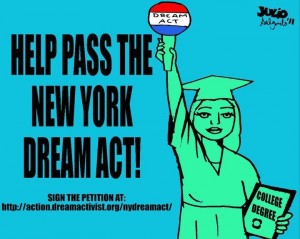 After successfully completing high school, Ana took one year off to work full-time and save money to pay for her first year of college tuition. She wasn’t picky about it. She worked for an employer who paid her less than minimum wage. When she finally enrolled at CUNY, Ana continued to work full-time and attended school part-time. This past December, after five years of hard work and sacrifice, Ana graduated from college with a degree in Childhood Education specializing in bilingual education.

Ana’s staunch determination, unflappable work ethic, and unwavering desire to succeed are exactly the skills that we need – and students deserve – in this country’s teachers. In a school system like that of New York City, where 41 percent of students speak a language other than English at home, Ana’s training and personal experience in working with emergent bilinguals would serve New York students and the city well.

Yet, Ana is currently working in a factory, unable to make a difference in her life and that of her potential students. Her unauthorized immigration status is keeping her out of the classroom. And with no path to citizenship, Ana’s future is uncertain.

Like Ana, millions of undocumented immigrants (who are not going anywhere) remain in this country working jobs that Americans do not want to fill, paying taxes, and contributing to the economic development of our country. Their legal limbo and the uncertainty that defines their lives is the legacy of the unfulfilled promise of immigration reform of both President Barack Obama and his predecessor, George W. Bush. But it doesn’t have to be that way. We are better than that.

When did we stop being the home of the tired, the poor, the huddled masses yearning to breathe free?

The proposed DREAM Act would provide a path to citizenship for undocumented young people, like Ana, who attend college or serve in the military. A majority of Americans, regardless of their political affiliation, support this federal legislation. In fact, a recent FOX News poll found that 66 percent of all registered voters support allowing undocumented immigrants to remain in the United States provided that they learn English, paid back taxes, and have no record of legal troubles.

Frustrated with the lack of action at the federal level, 13 states have passed their own versions of the DREAM Act. While these state versions do not offer a path to citizenship to undocumented youth, they are a step in the right direction.

New York’s proposed DREAM Act would give students access to financial resources from both the public and private sectors. Over the past year, New York’s legislation has gained momentum with the support of several high-profile stakeholders, including Mayor Bloomberg, the Commissioner of Education, and CUNY’s Chancellor.

Governor Andrew Cuomo did not include the DREAM Act in the state budget which was approved yesterday, although he was encouraged by many to do so. The Governor has remained conspicuously silent on this issue. Some have speculated that a potential run for the White House in 2016 has something to do with his silence.

Forget that it is the right thing to do, the American thing to do, to provide people who are in this country going to school, working, and paying taxes the opportunity to become full-fledge, first class citizens. Let’s look at the numbers.

A recent study by the Fiscal Policy Institute found that the cost of offering state tuition assistance to college students in New York would increase expenditures by about 2 percent. This expense would be off-set by the tax revenue the state would gain since bachelor’s degree holders pay about $3,900 more a year in additional state and local taxes (not to mention further amounts that would be paid in federal taxes). Of course, this is dependent on federal immigration reform that would offer a path to citizenship.

Ana’s case is not unlike that of other better-known unauthorized immigrants. Her plight is the same as that of Filipino Jose Antonio Vargas, a former reporter for both The Washington Post and the San Francisco Chronicle, who last year revealed that he was an undocumented immigrant, and that of Daniela Peláez, the Colombian 18-year-old valedictorian who inspired the biggest demonstration on immigration reform since 2004 in Miami. She is among the best and the brightest this country has produced, but apparently has no problem dismissing.

New York has always been a place where people come to make dreams come true. If Governor Cuomo is really considering a run for president in 2016, he should support New York’s DREAM Act and show the nation that our state intends to lead the nation on education and immigration reform.

Vanessa Perez,Ph.D. is a professor of Latino Studies at the City University of New York and published author. She serves on the board of the National Latina/o Education Research and Policy Project. You can follow her on Twitter @VanessaYPerez.