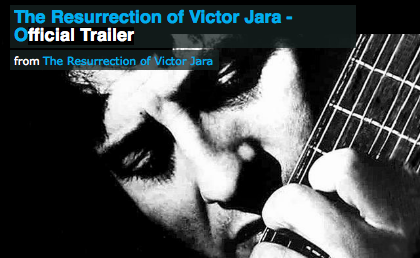 Life for Victor Jara was cut terribly short in a horrific manner by a fascist military regime in Chile 1973. Yet, thanks to his many fans, the eternal words of his compositions and the ongoing support from his family and friends, the world is reacquainting itself with Jara in a new documentary titled The Resurrection of Victor Jara.

A member of the Communist Party of Chile, Jara was a teacher, theatre director, poet, singer-songwriter and political activist. He was one of the neo-folkloric artists who established the Nueva Canción Chilena (New Chilean Song) movement which led to a revolution in the popular music of his country under the Salvador Allende government.

Described as the Bob Dylan of Chile, Jara wrote and sang songs of social justice, peace and love but he left the world shot 44 times by machine gun fire and his body dumped in a street. “The Resurrection of Victor Jara chronicles a tragedy of the past that still echoes ominously today — an eerie reminder of our tenuous hold on freedom and the precious human rights we often take for granted.”