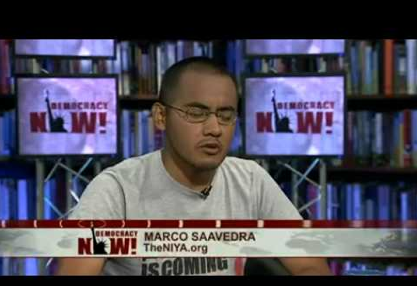 LatinaLista — In two days, thousands of DREAM-eligible youth will begin filing the necessary paperwork to take advantage of the Deferred Action for Childhood Arrivals program that the Obama administration has put into place.

Though immigration lawyers are issuing concerns and cautions, it’s expected that most of the youth eligible for the program will take advantage of it. The at-large community is hopeful that things go according to plan but there has been disappointment with another directive, prosecutorial discretion, that the Obama administration has issued that was to relieve deportations for another group of undocumented immigrants.

Those undocumented immigrants picked up for minor infractions and declared low-priority risks to society were supposed to be let go and not put into deportation proceedings. Yet, as reported by Democracy Now!, two DREAM-eligible youth, Marco Saavedra and Viridiana Martinez, infiltrated one Florida detention center and found many heartbreaking stories of low-priority immigrants who should be freed under the Dept. of Homeland Security’s own directive.

While Martinez is still being held in the detention center, Saavedra was released and almost immediately began recounting the stories of the low-priority immigrants who are being detained at the detention center. According to Saavedra, one immigrant, an Argentinian father, has gone on a hunger strike to protest his detention. Saavedra tells Democracy Now! what is happening to the low-priority immigrants and their struggles to rejoin their families.