Latina Lista: News from the Latinx perspective > General > President Obama: I want to sign that (immigration) bill into law as soon as possible

President Obama: I want to sign that (immigration) bill into law as soon as possible

Immigration makes us a stronger. It keeps us vibrant. It keeps us hungry. It keeps us prosperous. It is part of what makes this such a dynamic country. And if we want to keep attracting the best and the brightest that the world has to offer, then we need to do a better job of welcoming them. We’ve known for years that our immigration system is broken, that we’re not doing enough to harness the talent and ingenuity of all those who want to work hard and find a place here in America. And after avoiding the problem for years, the time has come to fix it once and for all. The time has come for a comprehensive, sensible immigration reform — President Barack Obama 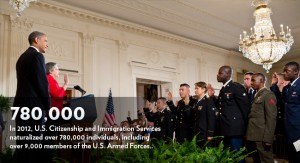 With those words at this morning’s naturalization ceremony for active duty service members and civilians in the East Room of the White House, President Obama underscored his continuing push for Congress to pass immigration reform sooner rather than later.

Joined by Homeland Security Secretary Janet Napolitano as well as U.S. Citizenship and Immigration Services Director Alejandro Mayorkas, President Obama spoke in front of 28 men and women hailing from 26 countries, including 13 service members from the Air Force, the Army Reserve, the Marines, and the Navy.

Welcoming them and their families, President Obama highlighted the personal stories of a few of the men and women assembled to take the Oath of Citizenshp before reminding the audience that there are promising signs of Congress coming together to craft a fix for a “broken” system.

In his remarks, the President said, “There are bipartisan groups in both the House and the Senate working to tackle this challenge, and I applaud them for that. We are making progress, but we’ve got to finish the job, because this issue is not new.

Everyone pretty much knows what’s broken. Everybody knows how to fix it. We’ve all proposed solutions and we’ve got a lot of white papers and studies. And we’ve just got, at this point, to work up the political courage to do what’s required to be done. So I expect a bill to be put forward. I expect the debate to begin next month. I want to sign that bill into law as soon as possible.”

The event underscores the contributions made to the United States by immigrants from all walks of life including the foreign born members of the U.S. Armed Forces, as well as our shared history as a nation of immigrants. While the President remains pleased that Congress continues to make progress towards commonsense immigration reform, he believes Congress needs to act quickly and he expects a bill to be introduced as soon as possible.

The naturalization ceremony ended with the President calling on Julian de la Valle, from Colombia, to lead the Pledge of Allegiance.

The following service members and civilians attended as candidates for naturalization: