Latina Lista: News from the Latinx perspective > Media > Videos > Video: ‘Lady Pink’ uses the passion for her art to help teens express themselves

Video: ‘Lady Pink’ uses the passion for her art to help teens express themselves 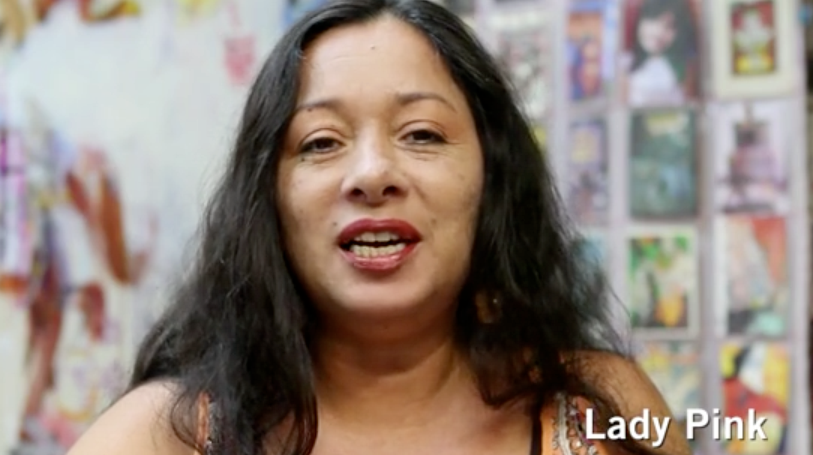 LatinaLista — Her real name is Sandra Fabara and this Ecuadorian transplant to New York City is more widely known by her street alias — Lady Pink. Lady Pink is considered one of the most famous graffiti artists of all time. Ironically, she never would have even entered the male-dominated world of graffiti had it not been for the deportation of her Puerto Rican boyfriend. Grieving over the separation, she started tagging his name all over New York City. That was 1979.

It wasn’t long before she started tagging Lady Pink — chosen because she loved historical romances. A talented artist, Lady Pink studied for a while at the High School of Art & Design in Manhattan and while there, at the age of 15, she was formally introduced to graffiti writing.

From 1979-1985, her work could be seen on the sides of New York City subway trains. She ran around with hardcore graffiti-painting crews but she soon discovered there was a wider appreciation for her talent. While still in high school, her work began being exhibited in art galleries and by the time she was 21 she had a solo exhibit.

She has continued to paint her “passion” and, according to Wikipedia, her paintings today are “highly prized by collectors” and can be found from the Whitney Museum of American Art, the Metropolitan Museum of Art in New York City, the Brooklyn Museum to the Groningen Museum of Holland.

However, Lady Pink hasn’t forgotten what it was like as a teen to express herself the only way she knew. So, today, she holds mural workshops with teens and lectures college students on the passion of painting.