Video: Reminding Latinos the power of their votes 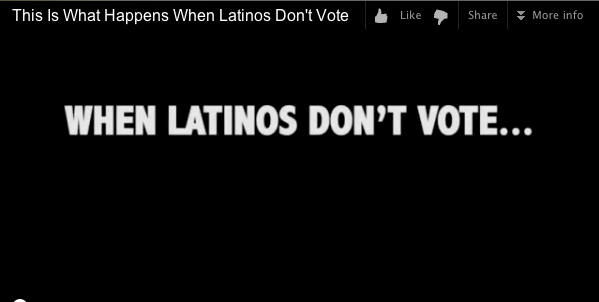 LatinaLista — Every poll measuring the candidates’ standings among Latino voters shows that Obama is easily ahead.

Polls: 70 Percent of Latinos Back Obama

However, everyone — campaign workers, Democrats, and probably President Obama and Vice President Biden themselves — are holding their collective breaths to see if the Latino electorate will show up in the numbers needed to give a second term to the Obama team.

If it weren’t for the fact that Latino voters haven’t delivered at election polls since their amazing turnout in the 2008 presidential race, the rise in anxiety among Democrats is understandable. So, phase 2 of the ‘Latino Get Out the Vote’ has begun.

Celebrities, politicians, Facebook friends and Twitter feeds are all encouraging people to go to the polls. But nobody is explaining to Latino voters the reasons — beyond re-electing Obama — why it’s important to vote.

A new video by Brave New Films, Latinos Don’t Vote, underscores the exact reasons why Latinos must vote for their country, themselves and for all the Latinos who don’t have a voice at the polls.

featured, Latinos, vote
Previous Post Foreign policy debate won't be complete without a weigh-in of Mexican cartel presence in US
Next PostTwo Latina students honored by MA Commission for Deaf and Hard of Hearing