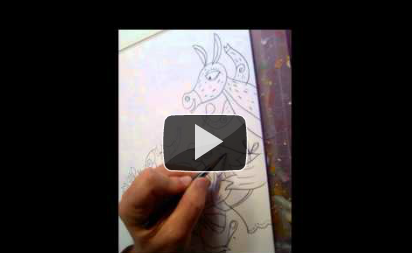 Rafael López is an artist and children’s book illustrator. Rafa, as he’s known to family and friends, credits his upbringing in Mexico with inspiring his artwork, which is described as a fusion of a strong graphic style and magical symbolism. The result has been a career laden with awards. Recently, Lopez was awarded his second 2012 Pura Belpré award for his illustration of “The Cazuela that the Farm Maiden Stirred.”

The award is named after Pura Belpré, the first Latina librarian at the New York Public Library. “The Pura Belpré Award, established in 1996, is presented annually to a Latino/Latina writer and illustrator whose work best portrays, affirms, and celebrates the Latino cultural experience in an outstanding work of literature for children and youth. It is co-sponsored by the Association for Library Service to Children (ALSC), a division of the American Library Association (ALA), and REFORMA, the National Association to Promote Library and Information Services to Latinos and the Spanish-Speaking, an ALA affiliate.”

Lopez not only illustrates children’s books but also drew the Latin Music Legends stamp series in 2011 for the US Postal Service; was asked to transform a rundown section of San Diego with bright colored murals and was asked to contribute three paintings to Oprah Winfrey’s school in South Africa. Today, he and his family divide their time between San Miguel de Allende and San Diego.

Previous Post No need to worry Romney will ever claim his Mexican roots for political gain
Next PostMexico's poet, Javier Sicilia, calls for unity to help combat Mexico’s violence