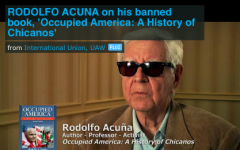 Rodolfo Francisco Acuña has been called the “father of Chicano Studies.” It’s a topic he knows well. Acuña is a historian, professor emeritus, and the author of Occupied America: A History of Chicanos, which tells the history of the Southwestern United States that includes Mexican Americans.

The book has been reprinted five times since its 1972 debut. The sixth edition was published Dec. 1, 2006 but today Acuña finds his book banned in Arizona and accused by the current attorney general, and former state superintendent of Arizona’s public instruction, of fostering “ethnic chauvinism.”

A longtime immigrant rights activist, Acuña shares his feelings about his book being banned and his thoughts as to why it’s important to fight the censorship of his book and the dismantling of the ethnic studies program in Arizona schools.

Previous Post Video underscores why Jose Hernandez will always be an astronaut
Next PostDelaware’s 2012 SBA Small Business Person of the Year: A former Latino soldier "sews" up the competition

Video underscores why Jose Hernandez will always be an astronaut
Comment
Delaware’s 2012 SBA Small Business Person of the Year: A former Latino soldier "sews" up the competition