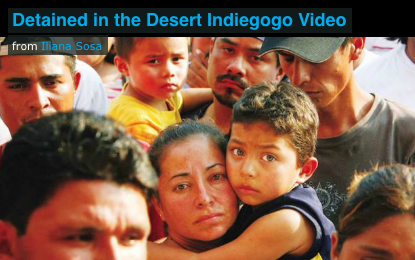 LatinaLista — In April, the Pew Hispanic Center released a report documenting how migrants from Mexico have stopped coming to the United States. However, the report doesn’t take into account the fact that many Central and South Americans are still making their way to the United States — many of them entering the country without the proper visas.

For those migrants who don’t have the required paperwork that would let them cross the border at any of the official checkpoints, there has always been another way to get in — via the desert. Over the years, men, women and children have trekked through dangerous terrain, in blistering heat to make it to this side of la frontera.

Some made it, but too many did not. Many died of dehydration amid the cacti and rattle snakes leaving behind only scant information about themselves that make it difficult for authorities to identify them so their loved ones can have peace of mind in knowing what happened. The saddest part of their deaths is that if most of them had only had water, they wouldn’t have died in the desert.

One organization, begun in 1986 by a man named Enrique Morones, wants to stop all these unnecessary deaths. Border Angels maintains rescue stations along the ten-state US-Mexico border region. Volunteers make sure there is enough water at these stations for anyone who needs it — and there are still too many people who do.

Yet, the story of migrants dying in the desert is one that most people have either forgotten or been distracted from by politicians and far-right factions delivering anti-immigrant rhetoric. But the fact remains people are still dying in the desert and one well-known Latina playwright wants to bring this life-and-death issue back to the forefront of the national conversation.

Josefina Lopez, the co-writer and playwright of the popular film and play “Real Women Have Curves”, wrote in 2010 the play “Detained in the Desert.” She wrote it in response to Arizona’s harsh immigration laws and the rise in violence against Latinos fueled by extremist media.

Detained in the Desert parallels two completely different people: Sandi, a second-generation dark skinned Latina and Lou Becker, a racist talk show radio host, whose lives converge in the desert of Arizona. An Arizona cop racially profiles Sandi, who refuses to show her identification. Accordingly, her refusal to show her “papers” puts her on an unexpected course toward immigrant detention.

Conversely, three siblings who have just suffered the loss of their brother due to a hate crime influenced by Lou’s racist talk show, kidnap him in hopes of seeking justice. In turn, Sandi is about to be transferred to another immigrant detention center when her I.C.E. bus crashes in the desert. She escapes only to end up stranded in the desert. Lou is freed by one of his kidnappers, who deliberately gave him bad directions to get him lost. Consequently, Sandi and Lou meet in the desert and help each other survive. Both Sandi and Lou come to understand the severity of the plight of the immigrants through a gruesome discovery.

Seeing that nothing has changed since she first staged “Detained in the Desert,” Lopez decided the time was right to take the play from stage to screen. Lopez, leading a team of women filmmakers, is executive producing the low-budget independent film. Calling it a human rights project, Lopez plans to use the film as a fundraiser for Border Angels.

The film is currently in pre-production and will start filming in late June. The goal is to finish the film before the elections. Progress so far has been good and according to Iliana Sosa, the film’s director, getting people on board has not been hard.

“The crew, actors, and filmmakers making this film are really doing this project as a labor of love,” Sosa said. “We are committed to immigrant rights, and the timeliness of this film is crucial. There hasn’t been a film out there that addresses these issues as boldly as ‘Detained in the Desert.'”

Once the film is made, Josefina Lopez tells Latina Lista that she hopes to submit it to Sundance (film festival) and other festivals to attract a distributor.

“In the worst case scenario, we will sell it on the RWHCStudio.com website as well as have it as pay-per-view on the BorderAngels.org website, whereby if you make a donation to their non-profit to support their humanitarian work at the border, you get to see the movie for free,” Lopez said. “We need to get this message to people in whatever way we can.”

Since Lopez is bootstrapping the film herself, she and her team have created an indiegogo campaign to help raise money for the post-production work. Their goal is $15,000 which will be used for post-production, creating a website and creating film festival materials. Deadline for the campaign is July 10.

“We want people to connect with immigrants on a human level–really see their situation as human–we’re trying to demystify what it means to be undocumented and also offer a new perspective on the ways that undocumented immigrants are often vilified by the media,” Sosa said. “If the audience finds a connection, even if it’s small, to the immigration aspect of the film, then I know I have done my job as a director. Both Lou and Sandi’s characters are flawed and complicated–if people connect to their humanity, then I know that my work has been fruitful.”

Taming the Ferocious Budget
1 Comment
Contenders for the Mole Crown