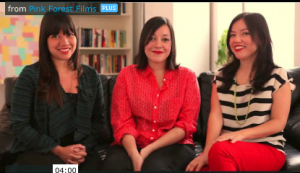 LatinaLista — Claudia Cifuentes appreciates good movies. A graduate of New York University’s film program she noticed that there were no modern-day, coming-of-age love stories that portrayed young marriages in an honest but hopeful way. A newlywed herself, Claudia began forming the premise of a film with three inspirations: Miami Beach, marriage, and the film The Graduate.

What resulted is the film After the Wedding.

It follows newlywed Diego Diaz (Nick Puga) as he heads down to Miami Beach for a few weeks to finish his latest novel, but when he becomes emotionally intimate with a sexy bartender, he and his wife are left to examine the true state of their young marriage.

A native of Miami Beach, Claudia loved how her hometown embraces Latin and Caribbean influences. A daughter of Guatemalan immigrants, Claudia knew she wanted to return to the area to direct her first film and while she wanted to do it with an almost total Latino cast, she was adamant that it not be seen as a Latino-themed movie — just that the actors happen to be Latino.

Realizing that making a movie takes mucho dinero, Claudia found two people who not only believe in her project enough to co-produce the film with her and help her raise money but are with her all the way — just as they had been growing up. Claudia’s sisters, Karina and Lisa Cifuentes joined their sister in creating Pink Forest Films.

Filming is supposed to start this summer in Miami Beach and the three sisters are busily trying to raise the money to start production. To help,they’ve started a kickstarter campaign to raise funds.

In addition to wanting to put a good film out there, the sisters have another reason for making After the Wedding:

Being that our parents are from Guatemala, it is important to us to make a film that embraces our Latin culture – but in a modernized way! WE BELIEVE THE PORTRAYAL OF LATINOS IN HOLLYWOOD NEEDS MAJOR UPDATING, and are really excited to be making a film about contemporary Latinos.

The kickstarter campaign ends on May 27 and the women are still short of their $75,000 goal. To motivate donations, the women have put together several enticing “packages.” Depending on the amount of their donations, people can expect everything from a personally guided tour of Miami with stops at popular boutiques, landmarks and restaurants to spa packages and inclusion in the movie credits.

To round out their efforts to create buzz for the film, the women plan to also create a blog series called “Our Secrets to a Happy Marriage.” The women will interview couples about their secrets to happy marriages, including their parents, Otto and Miriam Cifuentes, whom, the filmmakers proudly share, recently celebrated their 36th year of marriage!

Previous Post With another GOP state legislature voting down in-state tuition for undocumented students, it's time Latino voters come to their senses
Next PostSpotlight Nonprofit: Summer camp brings back the "magic" for children of cancer patients

With another GOP state legislature voting down in-state tuition for undocumented students, it's time Latino voters come to their senses
Comment
Spotlight Nonprofit: Summer camp brings back the "magic" for children of cancer patients