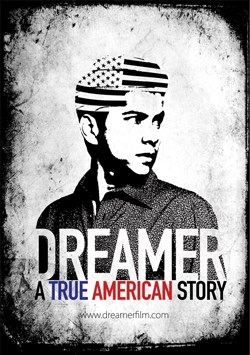 LatinaLista — Even though President Obama authorized the Deferred Action for Childhood Arrivals (“DACA”) program to grant deferred action from deportations for certain undocumented young people, there are still many undocumented youth who either don’t qualify or have aged out of the requirements.

For that reason, another film about the DREAMer experience serves to not only keep the issue of immigration reform in the forefront but is a way to remind everyone how the lack of a bill recognizing 11 million people is and has been taking a traumatic toll on children, families and communities.

The director, Jesse Salmeron, was brought to the U.S. as an undocumented toddler. Since he and his family came from El Salvador, where a bloody civil war was raging, they were eventually granted protected status and are now green card holders. Yet, Salermon had many friends who weren’t as fortunate in receiving legal status as he.

Explaining his reasons on the film’s website for writing the film, Salmeron wrote:

I looked upon their pain and began to write Dreamer. After the script had been written, the community stepped in. In the summer of 2011, we raised over $50,000 in seed money for the film on Kickstarter.com. This was a film of the community in many ways and I was fully aware of the responsibility of finally telling a DREAMer’s story. It had to be honest. It had to reflect their reality. It had to expose their deepest fears while laying bare their struggles with identity.

And that is the central theme of Dreamer. It’s a topic I have yet to come to terms with myself.

Dreamer: A True American Story is currently making the rounds of film festivals.