Latina Lista: News from the Latinx perspective > General > Young Latinos listen to classmates more than friends or family when it comes to going to the polls

LatinaLista — In the paper “Youth, Race and Voter Mobilization” released yesterday by the black youth project, the researchers cited many facts about political party mobilization efforts among young voters that weren’t fully realized. For example, in the 2008 election, it was widely believed that the Democratic party was outdoing the GOP when it came to mobilization initiatives among young voters but that wasn’t the case. 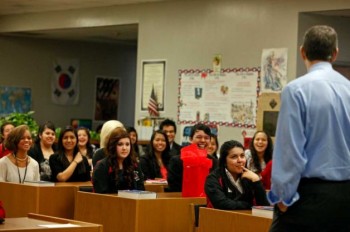 According to the report, Republicans had a 21 percent mobilization rate among young voters, ages 18-29; Democrats came in at 19 percent. The two percent difference may not seem like a lot until it’s realized that the GOP had been stepping up their efforts to reach youth, especially black and Latino youth, since the 2000 election.

Given their efforts, the GOP could have been on a roll had not the current crop of presidential nominees been so adamant against passing the current DREAM Act or trying to tell Puerto Ricans in Puerto Rico that they need to learn English to become a state.

So, whether it’s by default or actual choice, many young voters of color are falling into the Democratic camp. Maybe because of this, Democrats don’t feel they have to work too hard among young Latino voters. That would be true if the young voters were returning voters.

Research says the likelihood of young people to vote again once they’ve already voted is high but the Pew Hispanic Center has highlighted the fact that every month approximately 50,000 Latinos turn 18 and become eligible to vote. When taken in a yearly total that’s almost 600,000 new Latino voters eligible to go to the polls.

From experience, young voters (ages 18-29), unless they live in a very civic-conscious family or belong to such a group, don’t take the initiative to register to vote or follow through on voting. Usually, these young voters are influenced by someone. For young Latino voters, the report says that influence doesn’t lie with the student’s church group (it accounts for only 5 percent) or even friends (6 percent). Surprisingly, it’s their classmates (19 percent).

It begs the question: Do Latino students feel their classmates are more informed than their friends and, in turn, perceive them to be “smarter?” Just a thought.

When it came to other types of mobilization penetration efforts used in 2008, Latino young voters were reached at higher rates than either whites or blacks in four out of six categories: Traditional mailers, flyers, automated phone calls and phone calls.

E-mail, according to the report, proved to be more effective for whites and in-person contact had much more success among blacks. As long as e-mail isn’t assumed to be text messages, I would agree with this finding. However, text messages were a big part of Latino voter mobilization in 2008 and proved to be a very successful strategy.

Since social media wasn’t as prevalent back in 2008 as it is today, it will be interesting to see the impact of social media in 2012 mobilization efforts.

The bottom line is that with so many young Latinos eligible to vote, it’s unbelievable why the Obama campaign and the Republican party aren’t making more of an effort to reach these new voters. Voters for whom the 2012 election is a clean slate and allows both parties to make a fresh start with the newest generation of voters.

featured
Previous Post Cartoon Network takes the animation out of the serious topic of bullying
Next PostViernes Video:

Cartoon Network takes the animation out of the serious topic of bullying
1 Comment
Viernes Video: