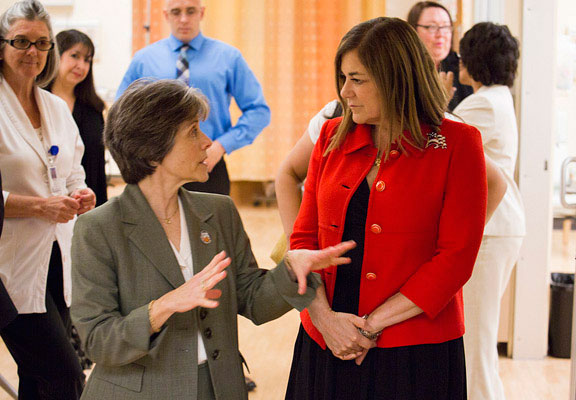 There are a growing number of Latinas, and other women of color, in office, defying expectations and explanations, says Christina E. Bejarano in this excerpt from “The Latina Advantage.”

(WOMENSENEWS)– Evidence of Latinas’ potential diminished political disadvantages can be seen by examining the current representation of racial/ethnic-minority women in elective office compared to their male counterparts.

As of 2005, women of color at the state and national level made up a larger proportion of their minority delegation, compared to their respective minority male counterparts, than white women compared with their white male counterparts. Racial/ethnic-minority women currently account for a greater share of minority political representatives than white women do of white elected officials, in both the U.S. Congress and state legislatures.

In the 112th Congress (2011–2012), women held 90 total seats in Congress, with 73 in the House and 17 in the Senate. White females were 73.3 percent of the female delegation, or 66 seats. In comparison, there were 13 black females, four Asian females and seven Latina females in Congress.

As of 2011, out of the 28 Latino members of the U.S. Congress only seven were Latinas (from California, Florida, New York and Washington); five of these were Democrats and two were Republicans. However, Latinas made up a higher percentage of state legislators nationwide. In 2011, 1,740 women state legislators served nationwide, of whom 347, or 20 percent, were women of color and 1,393, or 80 percent, were white; the women of color included 241 African American women, 35 Asian American/Pacific Islander women, 63 Latinas and 8 Native American women. Racial/ethnic-minority women constitute 4.5 percent of the total 7,382 state legislators nationwide.

In 2011, 63 out of 245 Latino state legislators were Latinas. Twenty Latinas were in the state Senates and 43 in the lower house of the state legislatures; of these the majority, 57, served as Democrats and six as Republicans. The states with the most Latinas in the state legislature were New Mexico (11) and Texas (eight). In Texas’s 2011 House, Latinas made up 20.7 percent of the Latino delegation. In California’s 2011 state assembly, Latinas made up 13.3 percent of the Latino delegation (with three Latinas). Overall, Latinas have increased their political presence across a wide variety of state legislatures and “at a rate that outpaces overall gender representation.”

Still Underrepresented
Although Latinas are increasing their representation in elective office, they remain underrepresented compared to their population numbers. Having more women in elective office offers many benefits to the country: legitimate democratic government and more diverse points of view and leadership styles. Women and men also tend to have different life experiences and points of reference, which “can translate into a distinctive way of viewing existing legislative proposals and can lead to different agendas.” Mary Hawkesworth, distinguished professor of political science and women’s and gender studies at Rutgers University in New Jersey, contends “that the mere presence of women of color in the U.S. Congress is transforming the institution, as they battle stereotypes of minority women and shape the public policy debate on issues pertaining to women and minority groups.”

Latinas have made significant strides at attaining political office in the last 10 years and yet researchers have not been able to explain this phenomenon. Latinas’ political success has surpassed expectations and explanations. Since there are no clear explanations, we cannot know whether this phenomenon will continue in the future or level off.

Christina E. Bejarano is assistant professor of political science at the University of Kansas. She is a specialist in American politics, minority political behavior and political psychology.

Previous Post ‘Smuggled’ – film depicts the torture and terror suffered by immigrants crossing illegally into the U.S.
Next PostSouth America offers array of language immersion programs befitting a continent of the future

‘Smuggled’ – film depicts the torture and terror suffered by immigrants crossing illegally into the U.S.
1 Comment
South America offers array of language immersion programs befitting a continent of the future