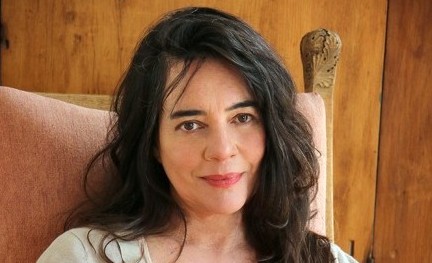 It’s the dream of thousands to go to New York City or Hollywood and become a star. The entertainment world, for so many in our society, means glamour, money, recognition, and the pinnacle of success. It’s one of the toughest paths, and the lion’s share end up waiting tables, spending relentless hours on casting calls, and when the cash and hopes dry up, they retreat to their hometowns, or settle on their back-up plan.

Julie Carmen fulfilled that dream. She became one of the few Latina actresses to “make it.” She starred in films for directors Robert Redford, Michael Mann, John Carpenter and John Cassavetes. Her characters were seen on the most popular of TV shows. Quentin Tarrentino cast her in an “ER” episode he directed, and she played Angelina Jolie’s mother in a TV mini-series “True Women.”

On a personal level, she knew something was missing.

She went back to school and earned her MA in Clinical Psychology. Today, she juggles it all. She stars in a soon-to-be-released feature film, Dawn Patrol. She is a practicing Marriage and Family Therapist. She is the Associate Director of Mental Health at Loyola Marymount University’s Yoga Therapy Rx program.

Most people understand the role of an actress, and even the role of a Marriage and Family Therapist. A yoga therapist may require an explanation.

A certified yoga therapist uses a wide variety of Eastern and Western techniques, including yoga, to coach their clients to an improved state of physical and mental well-being. Yoga therapy can be beneficial for pretty much anything, including insomnia, arthritis, sciatica or PTSD. Many, like Julie, are medical professionals who integrate what they learned in yoga teacher training with their work as mental health professionals, physical therapists, rehabilitation physicians or clinical kinesiologists.

At Loyola Marymount University’s Yoga Therapy Rx, she teaches Assessment and Treatment Planning for Anxiety and Depression and Healthy Families in a Toxic World. Not your typical yoga class, for sure. And not our typical “fall-back” job for an actress.

“When I look at a genogram of my family tree, it’s filled with teachers, social workers, nurses, doctors, pianists, and one actress. Sometimes it takes one relative to spark a child’s imagination,” says Julie. “My Auntie Grete starred in the original stage production of Max Reinhardt’s Midsummer Night’s Dream in Berlin, but then became a rehabilitation nurse when she emigrated to New York in the ’30s. My only brother is an MD, PhD but is also a world-class conga drummer. It’s normal, in my family, to follow our bliss, but we take social responsibility very seriously.”

She also designed a yoga therapy protocol, pro bono, for the Los Angeles Unified School District Pregnant Teens Program. She believes pregnant teens need to be free from prejudice and isolation. Her words of advice for teen moms, or pregnant teens, are to 1) Stay in school, 2) Create community and 3) Find your own role models.

“Community involvement helps me counter pessimism that grows daily, when I read the newspaper and contemplate the state of unrest in the world. Choosing a profession can ideally align one’s survival needs with core values like wanting to make the world a better place.”

On the other end of the spectrum, she has been Suzanne Somers’ personal yoga therapist for 12 years. Julie has been working three times a week with Suzanne to keep her mentally and physically at her best. Julie is mentioned in Suzanne’s books, and Suzanne appears in a few of Julie’s yoga videos.

For more on Julie Carmen’s Hollywood career, visit http://www.juliecarmenactress.com; View Yoga Therapy video clips from Julie’s recently released DVD at https://vimeo.com/99304501 or register for her a five hour graduate course at Loyola Marymount at www.yogatalks.com/blog. Healthy Families in a Toxic World is open to the public and qualifies for CEU units for mental health professionals.

Deborah Charnes is a freelance contributor and has more than 30 years experience working in multicultural communications. She is owner of The Write Counsel.