Latina Lista: News from the Latinx perspective > Causes > Crowdfunding > Crowdfunder: How a Boston couple is “shining a light” on saving lives in Costa Rica

Crowdfunder: How a Boston couple is “shining a light” on saving lives in Costa Rica 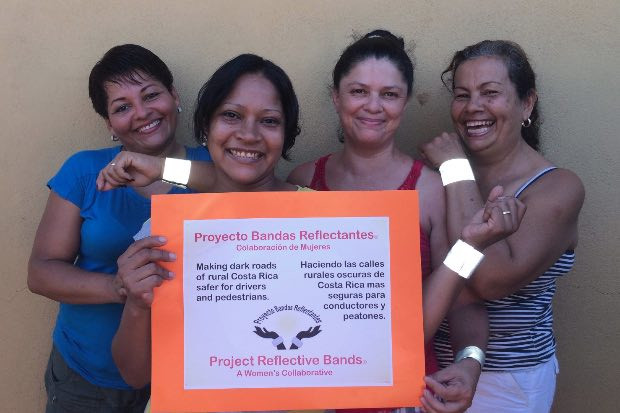 LatinaLista — Boston natives Eli and Debbie Thompson moved to the rural, Pacific Coast of Costa Rica in July 2014, to see the world through a different lens. Their perspective of life has changed in the short time they’ve lived in Costa Rica. They now understand why Ticos (the name Costa Rican’s call themselves) were recently named the “Happiest People on Earth.”

Yet, at the same time, they discovered that a preventable danger stalks too many Ticos who walk at night in areas of the country that have no street lights. The American couple decided to do something.

Road-related fatalities rank fourth in causes of death in Costa Rica. There are three times more pedestrian fatalities than alcohol related accidents in Costa Rica. Being on the roads at night is a dangerous and scary experience for pedestrians and motorists.

By 6:30 pm every night of the year, it gets dark and it’s very hard to see what’s ahead on the roads.  The roads are narrow,  have no sidewalks, and rarely have any street lights. Nevertheless, the road is the only place to walk.

Jungle on both sides or fear of snakes in the brush keeps everyone on the road. Only 18% of age-eligible drivers have a driver’s license. The rest travel by bus, bike, moto, or walk and many assume that because they can see the oncoming cars bright headlights, that the drivers can see them  … but they can’t.

Shortly after the couple moved to Costa Rica, Eli conceived of the idea to create and distribute reflective bands for the people living in the surrounding area.  They are now making this idea a reality.  There are about 3,000 residents in the surrounding towns (Potrero, Flamingo, Brasalito, Huacus, Villa Real, and Matapalo).  Eli and Debbie have purchased enough reflective material from the States for a first run of 3,000 bands.

Thanks to an introduction by Laetitia Dewier, founder of CEPIA, a local non-profit community center, the couple have teamed up with some women in the surrounding area, allowing them to launch: Proyecto Bandas Reflectances: Collaboration de Mujeres / Project Reflective Safety Bands: A Women’s Collaborative.

Four women have already made almost all 3,000 bands. The women are earning an income and proud to be contributing from the beginning to a project that will directly impact their community.

Eli and Debbie have wrestled with how to distribute the Reflective Safety Bands and track the impact they have on the roads. After much consultation, trial and error, their initial plan is to give them away for free at the local markets, churches, schools, on the streets, etc. They have created explanatory displays in English and Spanish with rings of 40-60 bands attached and have hung them in many bus stops, markets, and popular road-side areas. They’ve watched as they disappear one-by-one and have had great feedback so far.

Needless to say, this method is quite costly. They hope to supplement the costs (currently, approximately $1.25 / band) through private and corporate donations and purchases by local business who believe in the project and want to give them to their workers.

Another option the couple has considered is creating micro-business opportunities for local Tica women, including their seamstresses. They would receive the bands from the Collaborative, sell them to their community, and return 50% to the Collaborative. Hopefully, growth will occur when word of this project spreads to the surrounding areas and they are able to create opportunities like this in much of Costa Rica.

The Indiegogo Campaign, with a fundraising goal of $5,000, is to ensure the continuation of this project beyond the current pilot of 3,000 bands. The funds will cover material, printing, paying the seamstresses, and promotional material.  The goal is to blanket the local area with bands. The couple plans to return to Boston in July and hope to raise enough to leave the Collaborative with the resources to expand and sustain the project.

Costa Rica, pedestrian, saving lives
Previous Post 2016 "State of the Air" report finds more than 1/2 of Americans live with unhealthy air pollution
Next PostLas Patronas’ Kitchen: A documentary about the women who give food – and hope- to migrants travelling northbound on “La Bestia”

2016 "State of the Air" report finds more than 1/2 of Americans live with unhealthy air pollution
Comment
Las Patronas’ Kitchen: A documentary about the women who give food – and hope- to migrants travelling northbound on “La Bestia”