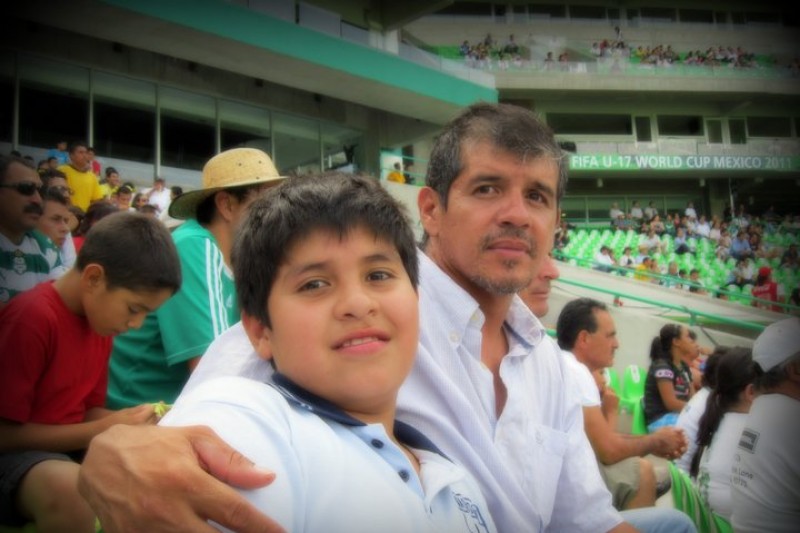 Claudia Amaro is one of the Dream9, the first group of undocumented youth who presented themselves at the U.S.-Mexico border in July of 2013, asking to come home. Two months later, her husband, Hector, followed, requesting asylum at the border.

He was taken to Eloy Detention Center and has been held without bond since then. Now, 22 months later, Claudia and her family have won the right to a bond hearing through appeals. Although, she doesn't know how much his bond will be, she expects it will be high (over $15K) as the judge who denied it will now have to set it. So far, a hearing date to set the bond has not been scheduled.

Thousands are detained while they await a decision before a judge on their immigration cases. Hector has been detained for 22 months as his asylum case is being processed.

Hector has overcome much hardship in his journey to reunite with his family, who are currently living in Wichita, Kansas.

Hector's problems began with losing a legal battle that resulted in his deportation despite having a life of 17 years in the U.S. and being a father to a U.S. citizen child. Hector then re-started a life in Mexico where he was subject to violence and extortion – he was kidnapped for ransom and lost family members who were killed by corrupt police officers.

Today, Hector is asking for refuge in a country that has been his home but where he is not allowed to join his family as he is facing prolonged and unnecessary detention while his asylum case is under review.

Like most families who have a parent in immigrant detention, it is hurting his family – his son Yamil is left without a father and Claudia is left alone to raise their son. Hector is being kept away from re-integrating and contributing to a country where he has strong family and community ties. The only ones benefitting from his detention is the private detention center where he's being held.

This center, and others like it throughout the country, are the only profiteers of a broken and inhumane U.S. immigration system.

Claudia's campaign is trying to raise $10,000 for the day when the wheels of the U.S. justice system finally move to decide on the amount of Hector's bond so he can rejoin his family while his asylum request is being considered.

The Pope, environmental justice and climate change
Comment
New study finds Latinos have the ganas to open businesses but lack the essentials to secure funding