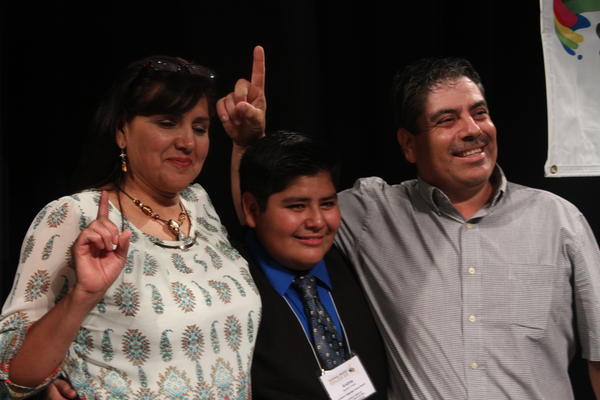 LatinaLista — Andres Arreola, an eighth-grader from Sunland Park, New Mexico had two goals on his mind when he took the podium at last week’s National Spanish Spelling Bee at the National Hispanic Cultural Center in Albuquerque, New Mexico — defend his title as champion and get the spelling of omnisciencia right.

He did both and became the second student in the history of the competition to win back-to-back titles.

Andres and his fellow spellers worked hard to get to this point. In addition to diligently studying more than 2,300 Spanish vocabulary words, the students had to train their ears to hear for accent marks and detect differences in letters that sound alike in Spanish, but not English. But above all, they had to remember to spell with Spanish pronunciation.

Lasting 19 rounds and four and a half hours, the competition, though gaining in popularity, has a long way to go to receive the kind of media attention and funding that the Scripps National Spelling Bee enjoys. For now, the largest financial supporter of the spelling bee is the New Mexico Association of Bilingual Education. David Briseño, who founded the event to elevate the status of Spanish and bilingual education, is moving the competition to San Antonio next year to take advantage of the larger Latino population and Hispanic media market.

children, education, featured, spanish, spelling
Previous Post Government anthropologists will attempt to speak with the uncontacted tribe, the Mashco Piro
Next PostCrowdfunder: Sharing via film a journey from undocumented immigrant to successful artist and citizen

Government anthropologists will attempt to speak with the uncontacted tribe, the Mashco Piro
Comment
Crowdfunder: Sharing via film a journey from undocumented immigrant to successful artist and citizen