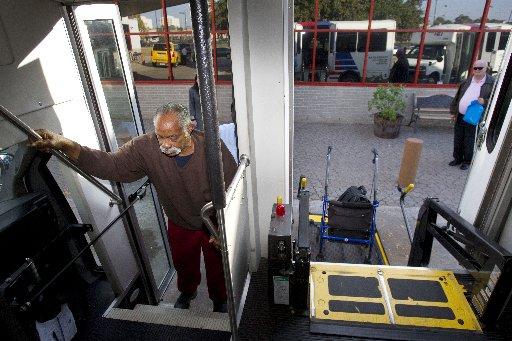 When my dad came to live with me a year and a half ago I had just decided to work from home. My initial idea was to take the summer off and to start looking for a job that fall when the kids went back to school. However, I decided to do contract sales for a few publications and that made it easier to spend time with him and to know what he was doing during the day. It worked out well for a while but after a year I knew I had to go back to working full time. Doing this presented a whole new set of challenges with my dad.

The first challenge is that he’d be lonely. I worry about him being at home alone all day and not getting out to the little restaurant where he likes to hang out and visit with people. The second challenge was how he would get to and from his doctor’s appointments if I or my sister couldn’t take him. Or how he would go places if it was raining or too hot or too cold outside to wait for the bus. I wouldn’t be here to drive him like I had before.

I’d heard about and had seen Houston’s paratransit service called METROLift through METRO, the Metropolitan Transit Authority of Harris County. A group of elderly members from the place of worship I used to attend would take the METROLift bus to bible meetings and then the bus would come back and take them home. My dad is a devoted METRO passenger, since he gets to ride the bus for free with his Senior card, so I decided to inquire about how he could use METROLift.

My first word of advice on this one is that it’s a long process. First, I had to fill out a form explaining why my father needed to use METROLift. A physician/certified health professional has to complete and sign a medical verification section of the application and they must also submit an additional signature on his/her letterhead or on a prescription note verifying completion of the application form. So I had to drop off the application with the VA Geriatric Clinic to have a doctor finish filling it out for me. That took a good while. METRO needs to have a valid reason why you need the service. As METRO says on their website, “Eligibility is not based on your disability but on your inability to ride local fixed route buses and is determined on a case by case basis.”

Once the doctor filled out the form and sent it to METRO, and they reviewed the application, I received a letter telling me that we had an appointment to go to the METRO office for an interview. I took my dad and they explained the METROLift service to us. After that one of the METRO employees asked us a few questions.

We were honest and explained that in most cases my father takes the bus (and sometimes even the light rail) and that he would only need the METROLift occasionally to get to places that are off a regular route or that would require him to take transfers, like to the VA Hospital.

Three weeks later my dad received his official letter and his METROLift ID/Q Card, which is different from his regular METRO bus card. He was approved!

Whereas his regular bus fare is free he has to pay for his METROLift trips. He bought a book of 10 tickets for $9.75. He has to use a ticket for each one way trip. All trips have to be reserved a day in advance. Even the online system only lets you reserve trips one day in advance. However the phone reservation system is closed on the weekend so you have to make reservations for the weekend and Monday on Friday. He is allowed to take one person for free with him on the bus or taxi as an attendant, so when my sister comes to visit she’s been able to ride with him.

The little METROLift bus comes to our house and picks up my dad to take him directly to the DeBakey VA Hospital where he has his check-ups. We haven’t been successful about return trips, but that’s a story for another article. Let’s just say that the pick-ups from our home and drop-offs at the hospital have worked great so far.

The other service I didn’t know about, until our information meeting and interview with METRO, is the METROLift Subsidy Program (MSP)- Taxi Transportation Cab. Patrons who have same day needs or same day trip changes can use a taxi cab. The rider pays the initial $1 of the cab fare and METRO will pay up to $8 of the meter fare. If the fare is more than $9 the rider is responsible for the difference. This is a great service for rides that are very close to the house, especially after dark or when it’s raining.

One evening I really wanted to go to a concert at a local venue. My father also wanted to go hang out at his little restaurant and I felt bad telling him he had to stay home because I couldn’t pick him up. (I don’t let him ride the bus after dark when I can prevent it.) So I told him that when he was ready to go home to call me and that I’d call a taxi for him.

He agreed to the arrangement and that’s what we did. When he was ready to go he called me. I called the taxi company and told them that he was a METROLift passenger. They asked for all his information, his name and ID number, and the pickup and drop off information. It worked great! I got to go to my concert and he still got to go to his restaurant for the evening.

Many cities have a similar service so check to see if your city’s transit system has something to fit your needs. Dallas has Senior Adult Services. Orange County in the New York/New Jersey area have the Orange County Transit. Chicago has the TAP Program for taxi services and the Dial a Ride program. LA has the LA Dot Transit Services for taxis and Dial a Ride. Santa Monica, CA and Solano County, CA also have their own services.

Services like these give seniors more independence and makes it possible for them to get out of the house to attend church, the grocery store, and to attend to other needs. This offers them a better quality of life and the opportunity to socialize with other people.

I encourage you to do the research and to be patient when applying. It can take a while to get approved before you can start using the bus service, but once you do it will make your life and the life of your elderly parent so much easier.

Previous Post Crowdfunder: Writing the stories of yesterday's "DREAMers"
Next PostUruguayan shoe company appeals to buyers to clean up environment and get a discount

Crowdfunder: Writing the stories of yesterday's "DREAMers"
Comment
Uruguayan shoe company appeals to buyers to clean up environment and get a discount