For some, sitting behind a desk every day is an acceptable and respectable way to contribute to the world around them. For others, there’s an undying, insatiable desire to discover more. Do more. Be more.

Lindsey Barrow Jr falls into the latter category. After graduating from College of Charleston, Lindsey expected to go to law school. “I ended up taking a job in Hawaii as a legislative aide,” he said. “Around the same time I became passionate about growing food and I started becoming very interested in farming.”

“I was kinda stuck in that mid-20’s rut of ‘What am I doing with my life?’” he said. “I didn’t want to get stuck behind a desk doing something I’m not passionate about.”

From a young age, Lindsey was interested in social justice issues. It was a natural progression for him to join his new passion, farming, to his life-long passion, social justice. “I came back from Hawaii with an idea to provide access to healthy food for people who don’t have it, while bolstering local farming.”

“I would sneak off to take a phone call or do some research,” he said. Sitting behind a desk, at a new job in Charleston, South Carolina, Lindsey began putting the dream into motion. 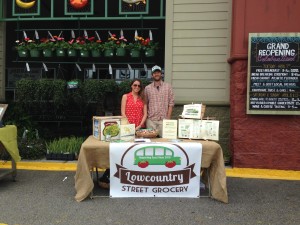 Lindsey Barrow Jr is the founder and creator of Lowcountry Street Grocery (LSG). Currently operating pop-up markets in and around Charleston, South Carolina, Lindsey and his team are chasing a much larger dream.

LSG is nearing the end of a kickstarter campaign, having raised $30,000 to purchase a bus and turn it into a mobile grocery store. The bus will be outfitted with specialized rails along the exterior of each side. Detachable produce bins will be attached to the rails allowing the team to literally, set up shop wherever they are. The bus will also have refrigerated storage units inside for dairy and meat products.

“We realized early on how difficult it is to create margin with food. Particularly produce,” Lindsey said. “Current models are non-profit, but we’re taking a Robin Hood economy scheme. The business model is not leeching off one sect or neighborhood. It’s really idealistic in that people can buy into what they want.”

LSG is currently testing the Robin Hood model with its pop-up markets. “When we are in affluent area, we stock our inventory with artisan breads, meats and cheeses,” he said. LSG can charge a premium for these artisan pieces. “When we go into low-income areas, we shift our inventory to reduce our prices and offset our costs.”

LSG is working with local entities and state government for SNAP benefits. Low-income residents will receive $10 worth of goods for every $5 spent when they use their SNAP benefits.

“We want to provide access, but also provide education,” Lindsey said. “We have an on-site test kitchen teaching people how to prepare certain foods. We will also provide recipes and nutrition data cards.”

LSG will see the close of their Kickstarter campaign this week. “We’ll finally get to have some fun. Go find the daggone bus!” Lindsey said. “We’ve been talking about it for years, so it’ll be fun to finally go find the bus, retrofit it and get it on the road!”

Lindsey hopes the bus will be ready to roll by late summer. After a full launch, LSG will implement a 1 month pilot program to see what works and doesn’t work.

“We believe that where you live, shouldn’t determine the kind of food you eat. We don’t believe it has to. We’re tired of talking about it. Sitting around tables determining solutions to the problem. We’re just going to do it,” Lindsey said. “We want to do something really just and if you want to take care of your neighbors, it can be done in a sustainable way.”

Aaron de Leon is “growing” awareness of the “Farmist” movement via his blog, The Urban Farmist and his weekly LatinaLista columns.

featured, grocery store, healthy foods, mobile grocery store
Previous Post Crowdfunder: The battle between the barrio and young Chicano
Next PostSmall Texas town creates unique way of honoring cowboy past and looking ahead to the future

Crowdfunder: The battle between the barrio and young Chicano
Comment
Small Texas town creates unique way of honoring cowboy past and looking ahead to the future