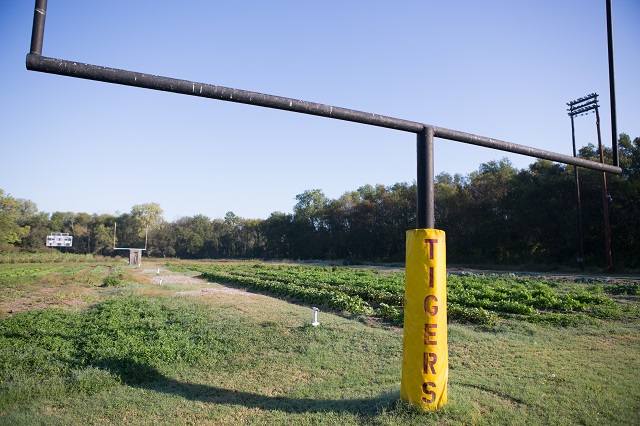 South of Dallas on highway 45, the city breaks beyond the Trinity River and gives way to a nondescript swath of land seemingly occupied by thick trees and dense underbrush. Exit at Simpson Stuart Road, turn right, cross the railroad tracks and there, to your right, you will see a gated entryway cut into the trees. Drive a little farther and you will find the stone-walled, paved pathway welcoming you to Paul Quinn College.

Shortly after discontinuing PQC’s struggling football team in 2008, college president Michael Sorrell turned his dream of bringing a garden to his community into a reality. What started as a joke about turning the unused football field into a farm, quickly became a reality thanks to a partnership with PepsiCo.

The We Over Me Farm at Paul Quinn College now has a little more than a two acres in production. The old football field (goal posts and scoreboard still standing) makes up 1.3 acres worth of production. “We’re small but we produce between twelve and fifteen thousand pounds of food per year,” Said Hannah Koski.

Hannah has been with the farm for two years. Working her way up from one of its first employees, Hannah is now the farm manager and director. “I came to the farm looking for information. After a 6-hour conversation, I was hired!” she said.

Hannah received her undergrad in anthropology and archaeology from Vassar College. Realizing she didn’t want to dig up rocks for the rest of her life, Hannah decided to pursue her love of farming. After serving as a farm apprentice in Maine, Hannah traveled throughout Europe and West Africa learning cultural farming for a year.

“One thing that really stood out to me,” she said. “Farming isn’t just about growing food. It brings people together.”

Feeling unsatisfied with traditional farming, Hannah decided to go back to school. She received her Master’s Degree in Cooperative Extension and Urban Agriculture from Cornell University. “I really wanted to focus on farming to grow community. I wrote my thesis on cooperative extension.” Hannah said. Cooperative extension includes the practice of education and growing community through agriculture.

Resonating beyond her passion for farming, is Hannah’s passion for her students. “Eighty-eight percent of our students have Pell Grants. Meaning they come from families earning less than $20,000 per year,” she said. “We do most of our recruiting in Oakland, Chicago, LA and NY.”

Hannah isn’t just planting seeds in the ground, she’s planting seeds of hope in her students. The vast majority of Hannah’s students come from food deserts themselves. Most have never stepped foot out of the inner city. “I quite have to teach them everything about farming. They’ve never worked with the tools. I have to teach some that it’s okay to get dirty and bees aren’t going to attack you.” She said with a chuckle. “I have this thing where I say, ‘I do it. You watch. You do it. I watch. You do it. I walk away.”

Every semester Hannah gets to witness a sort of metamorphosis take place before her eyes with her students. “They learn life lessons out here. If you don’t show up to care for your crops, they die. There are real world consequences out here,” She said. “The skill sets go beyond farming. Leadership, interacting with the community, managing your business… There are so many lessons learned.”

We Over Me divides its produce into 3 categories: direct sales, commercial and donations. We Over Me sells directly to the community on an on-going basis. Half of the field is reserved for Legends Hospitality, the catering company that services the AT&T Center — home of the Dallas Cowboys.

Legends buys 100 percent of the produce grown in that section of the field. We Over Me also provides aquaponic pea shoots to local restaurants. Lastly, We Over Me donates 15 percent of its yield to the North Texas Food Bank.

Hannah has 22 students this semester. In addition to community involvement and support from other institutions, We Over Me Farm has a monthly workday the 2nd Saturday of every month from 9am – 11am. “If I could say anything at all,” Hannah said. “I want to encourage people to come meet these students. Come to volunteer day. Don’t sleep in because it’s Saturday. These students will change your life. I promise.”