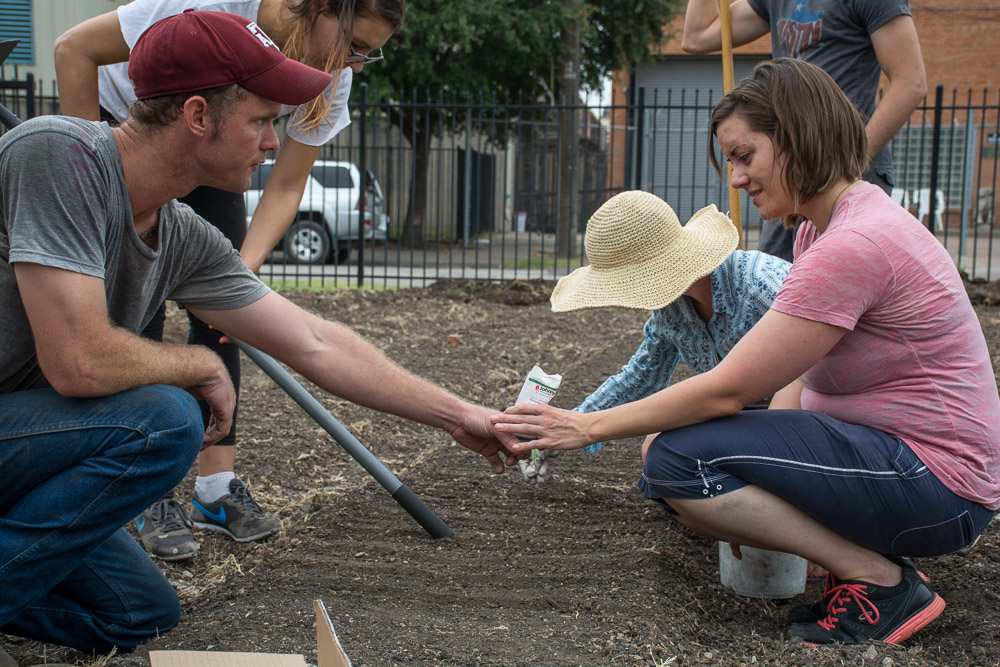 Far beyond the flashing lights and familiar sight of tourists scurrying about, busy downtown Dallas city streets give way to narrow alleys and cramped two lane roads. As commuters pass through the shadow of a massive multi-lane highway resting on top of giant concrete and steel columns, they are greeted by a small, unassuming corner lot brimming with new life and renewed hope.

Located at 1818 Chestnut in Dallas, Texas, Chestnut Garden is the product of collaboration between farmist David Cole, faith community Life in Deep Ellum and Deep Ellum Urban Gardens. Through a personal connection, Cole was given access to the lot that was once used as a truck yard for the old Dallas Stage and Lighting building. After renting a small tractor and tilling the land, Cole called together the first group of volunteers.

Gathered in this 8,000 square foot lot on a recent Saturday morning, volunteers planted broccoli, kale, swiss chard, green beans and radish. “The radish should be ready to harvest in a few weeks,” Cole said. “The biggest thing to come out of this season though,” he said, “will be the experience of people who have never gone seed to market.”

The long-term vision for Chestnut Garden hasn’t completely been decided, but Cole is sure of a few things. “We want to donate produce to community food banks and shelters. We also plan to sell some of the produce at the Deep Ellum Market,” he said, “then donate the proceeds to DECA (Deep Ellum Community Association).”

Volunteers will be able to take home a percentage of produce in exchange for time invested. “We really want people from this community to come over and get involved. Most of our volunteers are from Life in Deep Ellum or Deep Ellum Urban Gardens. We are incredibly thankful for them,” he said, “but we still want to make sure people from the community know we’re here and they are welcome to join us.” The next scheduled work day is Saturday, October 11th from 9am-noon.

For Cole, Chestnut Garden is less about innovative food production and more about good, old-fashioned inspiration. “I know we’re not going to change the world here,” he said, “but we hope to gain traction for food production and community gardening in low-income areas of Dallas. Hopefully we can inspire people to grow in their communities.”

Cole’s personal vision for the garden is like his well-worn boots — planted firmly on the ground. “I feel strongly that true, community development,” he said, “is to empower the hungry. To give them ownership of their food production. We have a responsibility to provide ways for people to get involved.”

Cole believes the initiative can get lost in the intricate details of innovative food production. “People get excited about new innovative technology such as Aquaponics,” he said, “but there is value in the low-tech, low input act of planting a seed in existing soil.” Cole believes that will pave the pathway to maximum sustainability.

For more information about Chestnut Garden and a schedule of volunteer work days, visit The Urban Farmist.