Latina Lista: News from the Latinx perspective > Immigration > What Do We Know About Immigrants with Temporary Protected Status?

What Do We Know About Immigrants with Temporary Protected Status? 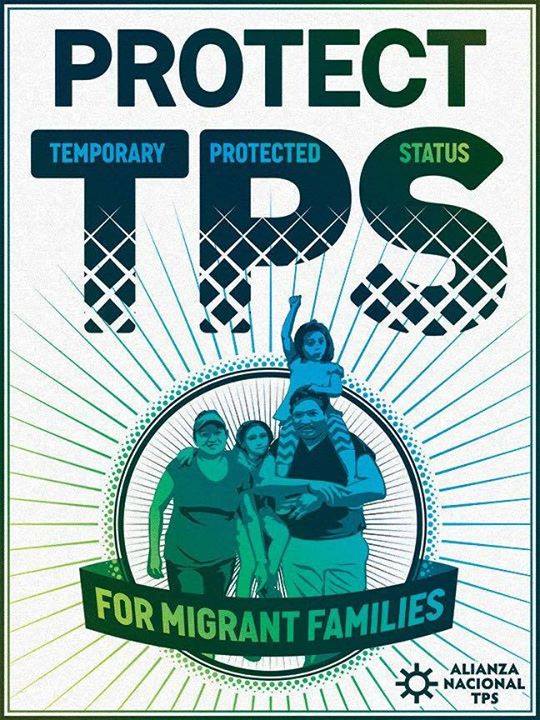 (Editor’s Note: This column originally appeared on the Center for American Progress website.)

Temporary Protected Status (TPS) is a little-known program that offers a temporary legal status to certain immigrants in the United States who cannot return to their country of origin due to ongoing armed conflict, natural disaster, or other extraordinary reasons. Once the U.S. Department of Homeland Security (DHS) issues a TPS designation for nationals from such a country, applicants must prove they have continuously lived in the United States since a specific date and undergo a criminal and security background check. The secretary of Homeland Security can grant and renew TPS for periods of six to 18 months. At this point, TPS beneficiaries must apply for renewal, submit to additional background checks, and pay a fee.

As the Trump administration works to systematically dismantle the U.S. immigrationsystem, over the past two years, it has ended TPS designations for 6 of the 10 countries. These six countries—El Salvador, Haiti, Honduras, Nepal, Nicaragua, and Sudan—represent 98 percent of the nearly 318,000 individuals currently protected under TPS. It also ended Deferred Enforcement Departure, a similar program, for certain Liberians in the United States. With these terminations, the lives of these individuals and their families were thrust in limbo.

There are several lawsuits challenging these terminations in the courts. In October 2018, the Northern District Court of California issued a preliminary injunction, leaving the designations for Sudan, Nicaragua, Haiti, and El Salvador temporarily in place. This means that individuals with TPS from these four countries can maintain their protection from deportation and work authorization. TPS holders from Honduras and Nepal are not included in this lawsuit, as it was filed prior to the Trump administration’s terminations for these two countries.

TPS holders have long-established lives in the United States

Unsurprisingly, many long-time TPS holders have families in the United States. Approximately 620,000 individuals live in a household with a family member that TPS protects. That number includes 448,000 U.S. citizens, 279,000 of whom are U.S.-citizen children under the age of 18.* The end of TPS will directly affect these children, as they will either be separated from their parents or forced to relocate to a foreign country to which they may know nothing of. The ramifications these children would face—including emotional distress, economic insecurity, and developmental impacts—would be life altering. For more information on the harms facing these children, please see the accompanying fact sheet.

Individuals with TPS live throughout the country. While states with traditionally large immigrant populations see similarly larger numbers of TPS beneficiaries, 21 states and the District of Columbia have at least 1,500 residents holding TPS.

TPS holders are major contributors to the U.S. economy

Beyond their inextricable links to their communities, the economy benefits in numerous ways from TPS holders. With a labor force participation rate of 87 percent, more than 246,000 TPS holders are working across the country. The largest occupation groups for these workers are building and grounds cleaning and maintenance occupations (48,000) and construction (44,000), with sizable numbers in crucial occupations related child care, personal care, and home health aides (9,300). Especially in states such as Texas, California, Florida, Virginia, and North Carolina, TPS holders working in construction are playing a large role in helping their communities recover from recent natural disasters.

Additionally, the end of TPS will have repercussions that extend far beyond the individuals holding TPS and their families. All of these construction workers, healthcare workers, and child care providers would lose their work authorization on the same day that their status is revoked.

For decades, the United States has provided protection to individuals unable to return to countries such as El Salvador, Honduras, and Haiti. These individuals have created lives for themselves in the United States. They have families and careers and have continually provided information the federal government requires in order maintain their status. Though some are currently protected from losing their status by virtue of a court decision, all are living with anxiety and uncertainty. They are being forced to contemplate an impossible choice on the horizon—return to countries they have not seen in a generation or remain undocumented in the United States. And for those with U.S.-citizen children, the decisions become even more difficult.

Just as is the case with Dreamers, Congress must pass legislation offering a pathway to permanent protection and citizenship for individuals with TPS.

Nicole Prchal Svajlenka is a senior policy analyst of Immigration Policy at the Center for American Progress.

El Salvador, families, Haiti Honduras, immigration
Previous Post New climate initiative 'heats up' in Latino communities across the country
Next PostYoung Latina 'speaks out' on the importance of including diversity