Latina Lista: News from the Latinx perspective > Politics > With the trauma of immigrant round-ups, would undocumented families be better off ‘self-deporting?’

With the trauma of immigrant round-ups, would undocumented families be better off ‘self-deporting?’ 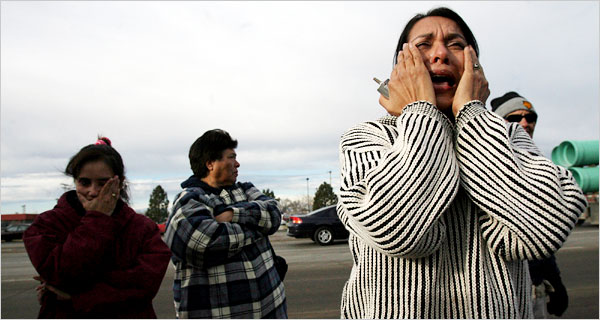 If we are to believe anything from an administration that deals in alternative facts and outright mentiras, it’s that President Trump will follow through on his campaign promise of deporting undocumented immigrants — without distinction.

In other words, it’s not only the rapists, murderers, drug or human traffickers, a.k.a. “bad hombres,” on the deportation list but the mothers, fathers and young DREAMer students too.

Ever since Trump signed the Executive Order broadening ICE’s authority to deport undocumented immigrants, we’ve seen people, who should not fit the “bad hombres” label, being rounded up, marched onto buses and planes and evicted from the country.

In addition to being forcefully separated from their families, children and friends, each deportee now has a record that prevents him/her from legally returning to the U.S. for, in most cases, ten years.

The dread of deportation among immigrant communities is higher today than at any time in the last 20 years. For that reason, Mexican Consulates in the U.S. are reporting record requests by Mexican nationals for dual-citizen passports for their American-born children. The parents want to make sure that if they are deported their children have no legal problems of their own.

It’s a new reality that many immigrant advocacy groups are telling undocumented immigrants to be prepared for, but wouldn’t it be better for these families to be advised to give up a fight they’re not likely to win?

In a message exchange, Johnson explains, “Even with stepped up enforcement, you are looking at only around 6k agents for 11 million targets. ICE fugitive operations are extremely ineffecient, resource-intensive.”

However, Johnson concedes it does depend on where a person lives.

“ICE, as of late, has shown a pattern of heavier enforcement in North Carolina and Georgia,” Johnson writes.”In big part because they are aware that the immigration judges in Charlotte and Atlanta deny just about every and any kind of immigrant case before them. The judges are worse than ICE, if you can believe it.

“Plus in Charlotte mostly, but also in Atlanta, the availability of attorneys is quite low–which again goes back to having such bad judges. It costs too much time and money for good attorneys to take on significant volume.”

But hoping against hope that legislative attitudes towards illegal immigration will change is taking its toll among the undocumented.

Mental health professionals are already warning schools and hospitals to expect to see more children and adults display symptoms of depression, stress and anxiety. Researchers have discovered a link between immigration fears of pregnant Latinas, affected by a local immigration raid, and the low birth weights and onset of early labor of these same women.

The trauma of being handcuffed or seeing a loved one shoved into the back of a police car, not to hear from them for either several hours or several days, would seem something that any caring parent would want to avoid for their children, if it weren’t for one thing  — the U.S. is home.

So, until Washington finds its compassionate soul to humanely address 11 million people, the undocumented among us will continue to fight to stay here — not to defy US immigration law but because they know, there’s no place like home.