Latina Lista: News from the Latinx perspective > Columns & Features > Guest Voz > Guest Voz: Eliminate “illegal aliens” once and for all!

Guest Voz: Eliminate “illegal aliens” once and for all!

LatinaLista — There has been an ongoing debate within and outside the Latino community over the usage of the term “illegal alien.”

Currently, there is the Drop the I-Word campaign that is asking people to sign a pledge to not use the word “illegal” when referring to people with undocumented status. 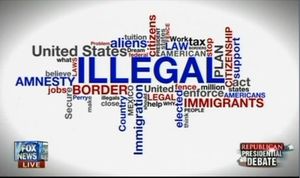 There has been a national push to get mainstream media to stop using the word “illegal” to describe immigrants. Several newspapers have come on board, such as the Miami Herald, and smaller newspapers.

Unfortunately, the Associated Press (AP) is not one of those news entities. They have been steadfast in defending their usage of the term, though they’ve been made aware that many find the term not only insulting and derogatory, but a contributor to the negative attitude the nation has developed towards undocumented immigrants.

As a result, many media outlets who consider the AP Stylebook the bible of journalistic writing, are following their lead. The continued usage of the term is angering more and more people.

In the following op-ed written by José Armas, and originally published by Hispanic Link News Service, Armas explains why he is offended by the term, how he sees its usage impacting public behavior towards immigrants and what needs to be done to stop its continuing usage.

Watching and hearing the GOP presidential wannabes mind-wrestle one another has been, well… entertaining. To resolve our immigration dilemma, top contender Herman Cain suggests building a fence that would electrocute intruders. Michele Bachmann would build two walls. Newt Gingrich would deny them entry unless they spoke English.

Is it any wonder this whole slew of presidential hopefuls are also known as the “Committee to Re-elect the President?” Who could have more loony ideas? Well, Democrats are working just as hard on this crucial issue.

Farmers in Alabama, Washington state, Georgia, Utah and Arizona are now whining that crops are rotting in the fields because immigrants are fleeing their state or afraid to show up to work. Some employers are offering twice the undocumented wages to “American” workers, but are finding few takers.

Hundreds of millions of agriculture, construction and service dollars are at stake. And we’re now destined to pay higher prices for food and products because of our continuing wacky immigration course. I could be flip and quote one observer who said, “Well, less food will help our obesity crisis.” But, I won’t.

We need a climate for common sense solutions. And, while not a presidential candidate, I’d like to propose a start:

Let’s stop demonizing and pursuing undocumented workers. They’re a national resource. We have a symbiotic relationship with them. To Obama’s discredit, his administration has arrested record numbers of undocumented persons, thereby adding to the wasted $ billions on needless police actions, deporting needed labor, building fences and behaving as ugly Americans.

Step #1: Stop referring to the undocumented as “illegals”. Otherwise decent people and the media have embraced this misleading slur and are unwittingly carrying the water for the racists in our midst. The fact is these immigrants are merely guilty of misdemeanor infractions, just like those who run red lights, don’t buckle their seatbelts, talk on the phone while driving, or jaywalk.

The Albuquerque Journal recently reported on an unpopular police crackdown on the increasing number of jaywalkers. So cops will now issue “warnings” to violators. Warnings. Not arrests. And we don’t label these miscreants “illegals”.

“Illegals” is derogatory, a hateful codeword and it should be abolished.

Hate crimes against Latinos since 9/11 have doubled with the escalating anti-immigrant mood. “Illegals” is disrespectful enough, but immigrants are also slandered by being called “terrorists”, “un-American”, “criminals”… Politicos and the media play into the hands of these bigots who incite violence and have poisoned the well of rational discourse.

All parties, conservatives and liberals alike, are drinking from this toxic well. Virtually all radio, television and print media bless this abhorrent term in their newsroom style books.

It’s way past time to remove the persistent racism fouling our society. If decent people everywhere would answer back “Enough!”, then we could begin to develop a rational, long-term immigration plan.

We could close this shameful chapter in U.S. history that is stained with the owning of slaves, the slaughter of Native American peoples, the internment of Japanese Americans and now, the battering of millions of immigrants whose only real crime is being brown and poor.

History should remember us for our role in advancing as a great society.

As it is, I wonder how Cain’s grandchildren will respond to that part of our mutual legacy of lynching black people and their grandpa’s presidential plan to dehumanize and electrocute human beings who migrate to shed their shackles of poverty while contributing to our society and forced to live in fear.

Likewise, there’s an irony in the case of New Mexico’s Susana Martínez, the first Latina governor in U.S. history, who has been on a campaign to target “illegals”, as she casually refers to them.

While relentlessly trying to overturn a state law that allows undocumented to pass a driver’s test and drive on our roads, it was discovered that her grandparents were undocumented immigrants, and are now denigrated with the ugly slur and consequently she is now branded publicly an “anchor baby.”

(Editor’s note: Since the column was first published, further research into New Mexico Governor Susana Martinez’s grandparents’ immigration status has been done by her political committee. The conclusion is that they may not have been undocumented.)

José Armas, of Albuquerque, is an award-winning writer and frequent contributor of commentaries to Hispanic Link News Service. armas@swcp.com

Previous Post As diabetes month is observed, Hispanics control the disease with diet and exercise
Next PostSpotlight Nonprofit: Veterans find strength and support to combat physical and mental wounds