Pew Research reports an increase among the undocumented population — maybe 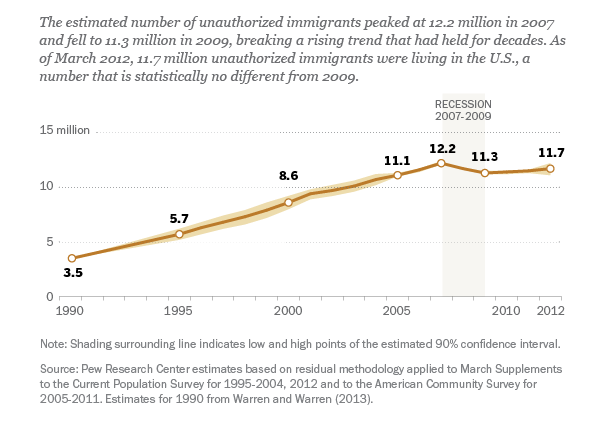 LatinaLista — If ever there was a report that could be described as “On the one hand, yes — on the other hand, no.” it would be today’s Pew Research report New Estimate: 11.7 million in 2012: Population Decline of Unauthorized Immigrants Stalls, May Have Reversed

The key words are “may have.” Pew Research Center’s senior demographer Jeffrey Passel explained to reporters on a conference call that though the number of undocumented immigrants reflect an increase of 11.7 million in 2012 compared to 11.3 million in 2009, it might not really be an increase since the margin of error is so wide.

Nothing will be known for certain until Passel and his team do further analysis that will take a few months but there were other findings that weren’t so ambiguous and do a better job of revealing the state of the undocumented population in the United States.

Passell shared that the Mexican 2010 Census correlated with the Pew’s findings that more Mexican migrants returned to Mexico during the 2007-2009 period. When asked if deportations may have been a factor in the trend of more Mexicans returning to Mexico, he said that there’s no way of knowing since the Mexican Census doesn’t ask for such detail. Yet, on the U.S. side, figures are more concrete.

Evidence points that before there was an uptick in deportations, the recession was probably the likely culprit in driving many Mexican immigrants home.

… the return flow of unauthorized Mexican immigrants for 2007-2009 was significantly larger than the flow from Mexico into the U.S.

Departures to Mexico in 2007-2009 also were larger than in the years immediately before and after that period, as evidenced in data from the Mexican census of 2010 and Mexican surveys from 2006 and 2009. This increased return represents a marked change in pattern from the largest immigration wave in U.S. history.

Another interesting trend that bucked normal flow patterns of migrants was that more immigrants coming into the country were not choosing one of the six traditional states (California, Florida, Illinois, New Jersey, New York and Texas) for their final destination. Perhaps with the exception of Texas, most traveled directly to non-traditional destination states where there were job opportunities.

Ancedotally speaking, it’s why there has been a steady population increase over the years in states like Arkansas, Georgia, North Carolina and a host of other states where the only places Spanish was traditionally heard was in high school and college language classes.

One last side note of the report is the terminology used to refer to undocumented immigrants. Rather than identify immigrants as ‘undocumented,’ the report’s authors used ‘unauthorized.’

“Unauthorized immigrants” are all foreign-born non-citizens residing in the country who are not “legal immigrants.” These definitions reflect standard and customary usage by the U.S. Department of Homeland Security and academic researchers…

Given the fact how some in mainstream media have justified their continued usage of “illegal” to describe undocumented immigrants as being “correct,” it’s ironic that the term “unauthorized” used by the Department of Homeland Security and academic researchers is actually the officially accepted version of the term.

This revelation shines a new light on how some mainstream media have less than an objective motive when it comes to reporting on the issue.

Pew Research, undocumented immigration
Previous Post Guest Voz: It's a journey for Latino immigrants to learn to "simply just be"
Next PostVideo: Latina book editor shares insights on how to get published in today's book industry

Guest Voz: It's a journey for Latino immigrants to learn to "simply just be"
Comment
Video: Latina book editor shares insights on how to get published in today's book industry