LatinaLista — The news for the Republican Party just keeps getting worse. A new Pew poll underscores by just how much public confidence has waned in the GOP. 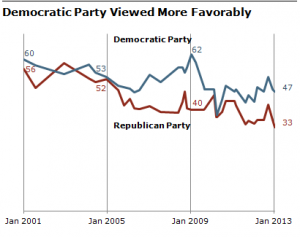 62% of the public says the GOP is out of touch with the American people, 56% think it is not open to change and 52% say the party is too extreme.

In contrast, numbers for the Democratic Party are more favorable. Only 46 percent think Democrats are out of touch with the American people, and 58 percent feel they are open to change.

Interestingly, the one area where the GOP outdid the Democrats was in having “Strong Principles.” Republicans garnered 63 percent versus 57 percent for Democrats. Though the poll doesn’t say it, common sense points to people thinking of the Tea Party and the financial cliffs that the GOP Tea Party House members have dragged the American people to the brink of in viewing the Republican Party as one with strong principles.

Though the Democratic party fared better than their counterpart, the approval ratings are still low compared to four years ago, according to Pew researchers.

While public opinion has been proven time and time again to be fickle, it’s clear that some members of Congress are outwearing their welcome when it comes to the public’s tolerance for political drama.

It’s that same political drama that should be of concern to both parties and our whole system of governance. A new generation that is more inclined to be involved in projects of doing social good, collaborating with peers and at ease with living in an interconnected world would find little appeal in a profession that ranks lower than reality TV stars.

Maybe that’s what Congress needs to do to boost their ratings and likability among this new generation — take their show to the entertainment channels because they’re not doing anything else.