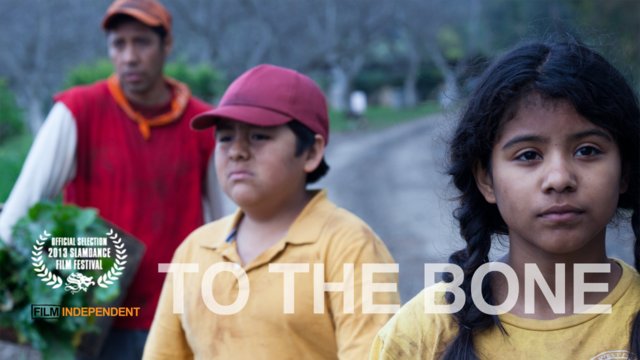 LatinaLista — The plight of migrant farm workers has never gotten the full attention it deserves. No matter that the only reason the nation is able to enjoy the convenience of having fruits and vegetables at our neighborhood markets is because of the backbreaking work of these men, women — and children hunched over in the fields under a blazing sun or pouring rain.

Unlike other jobs, migrant farmworking can be a family affair. Children join their parents as they criss-cross the country to harvest crops. It’s a hard life and a lifestyle that motivates some migrant children to strive for something better.

Such was the wish of 11-year-old Valencia, the main character in the mini-film To The Bone. Valencia, who along with her 8-year-old brother, toils in the onion fields with their father. Vale, as her family calls her, doesn’t like the life of a migrant farmworker. She’s tired. One day when an inspector comes to the fields, her father tells Vale and her brother to say they are 12-years-old but Vale sees this a way out. What could be easier by simply telling the truth? If only it were that easy.

Though less than 8 minutes long, To The Bone captures the guilt of a father whose children must work to help him provide for them, the exhaustion and frustration of a preteen girl whose thrust into adulthood before her time and the innocence of an 8-year-old who is protective and sensitive to a sister who is more like his mother.

Filmmaker Erin Li says that she was inspired to make the film after reading an article written by Human Rights Watch on the plight of child migrant farmworkers in the U.S.

Ever since releasing it in 2012, the mini-film has been racking up awards and recognition and was chosen as a Vimeo ‘Staff Pick.’

In less than 8 minutes, viewers get a pretty good idea of just how difficult the lives of child migrant farmworkers really are. Li provides resources on her website to help these children — who deserve a chance at a childhood.

TO THE BONE from Erin Li on Vimeo.