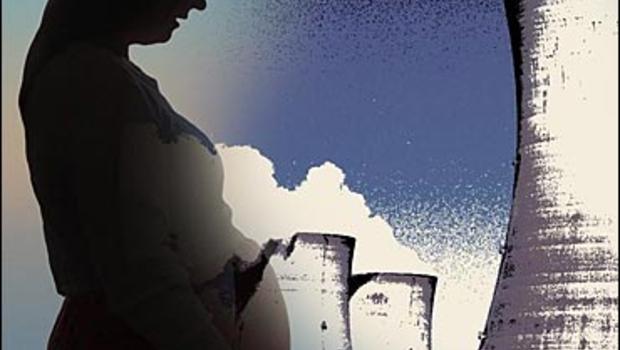 Even low levels of air pollution appear to raise the risk of a condition linked to premature births and lifelong health problems in children, new research shows.

Fine particles from car exhaust, power plants, and other industrial sources are breathed in through the lungs, but scientists have found evidence of the effects of that pollution in pregnant women’s placentas.

The greater the exposure to air pollution, the more likely a pregnant woman will suffer from intrauterine inflammation, a condition that can increase the risk of health problems for her child from the fetal stage well into childhood and beyond.

The findings add to growing evidence that the air a pregnant woman breathes can have long-term health consequences for her baby.

“Twenty years ago, we showed that high levels of air pollution led to poor pregnancy outcomes, including premature births,” says senior author Xiaobin Wang, director of the Center on the Early Life Origins of Disease at Johns Hopkins’ Bloomberg School of Public Health. “Now we are showing that even small amounts of air pollution appear to have biological effects at the cellular level in pregnant women.”

US Environmental Protection Agency air pollution standards may not be tough enough to protect a developing fetus, the researchers warn.

“This study raises the concern that even current standards for air pollution may not be strict enough to protect the fetus, which may be particularly sensitive to environmental factors,” says lead author Rebecca Massa Nachman, a postdoctoral fellow in environmental health sciences. “We found biological effects in women exposed to air pollution levels below the EPA standard.”

For the study, published in Environmental Health Perspectives, researchers analyzed data from 5,059 mother-child pairs in the Boston Birth Cohort, a predominantly low-income minority population. They assessed the presence of intrauterine inflammation by determining whether the mother had a fever during labor and by looking under a microscope at the placenta, which was collected and preserved after birth.

Pregnant women exposed to the highest levels of air pollution were nearly twice as likely as those exposed to the lowest levels to have intrauterine inflammation, with the first trimester appearing to be the time of highest risk. The results held up even when researchers accounted for other factors, including smoking, age, obesity, and education levels.

Intrauterine inflammation is one of the leading causes of premature birth, which occurs in one of every nine births in the United States and one in six African-American births. Babies born prematurely can have lifelong developmental problems. Preterm birth has been linked to both autism and asthma.

While maternal exposure to air pollution during pregnancy is associated with adverse birth outcomes, the biological mechanism has not been well understood. There are few outward signs of intrauterine inflammation in most women.

The Boston Birth Cohort is supported in part by the March of Dimes PERI grants, the National Institute of Environmental Health Sciences and the Eunice Kennedy Shriver National Institute of Child Health and Human Development. Other philanthropic support for the research came from the Ludwig Family Foundation and the Zanvyl Krieger Endowment.

fetus, health, pollution, pregnancy
Previous Post How come the "nation's largest living generation" doesn't have a bigger turnout at the polls?
Next PostCan't find a way to donate to Ecuador's earthquake relief efforts? Check out this round-up of 73 fundraisers.

How come the "nation's largest living generation" doesn't have a bigger turnout at the polls?
Comment
Can't find a way to donate to Ecuador's earthquake relief efforts? Check out this round-up of 73 fundraisers.