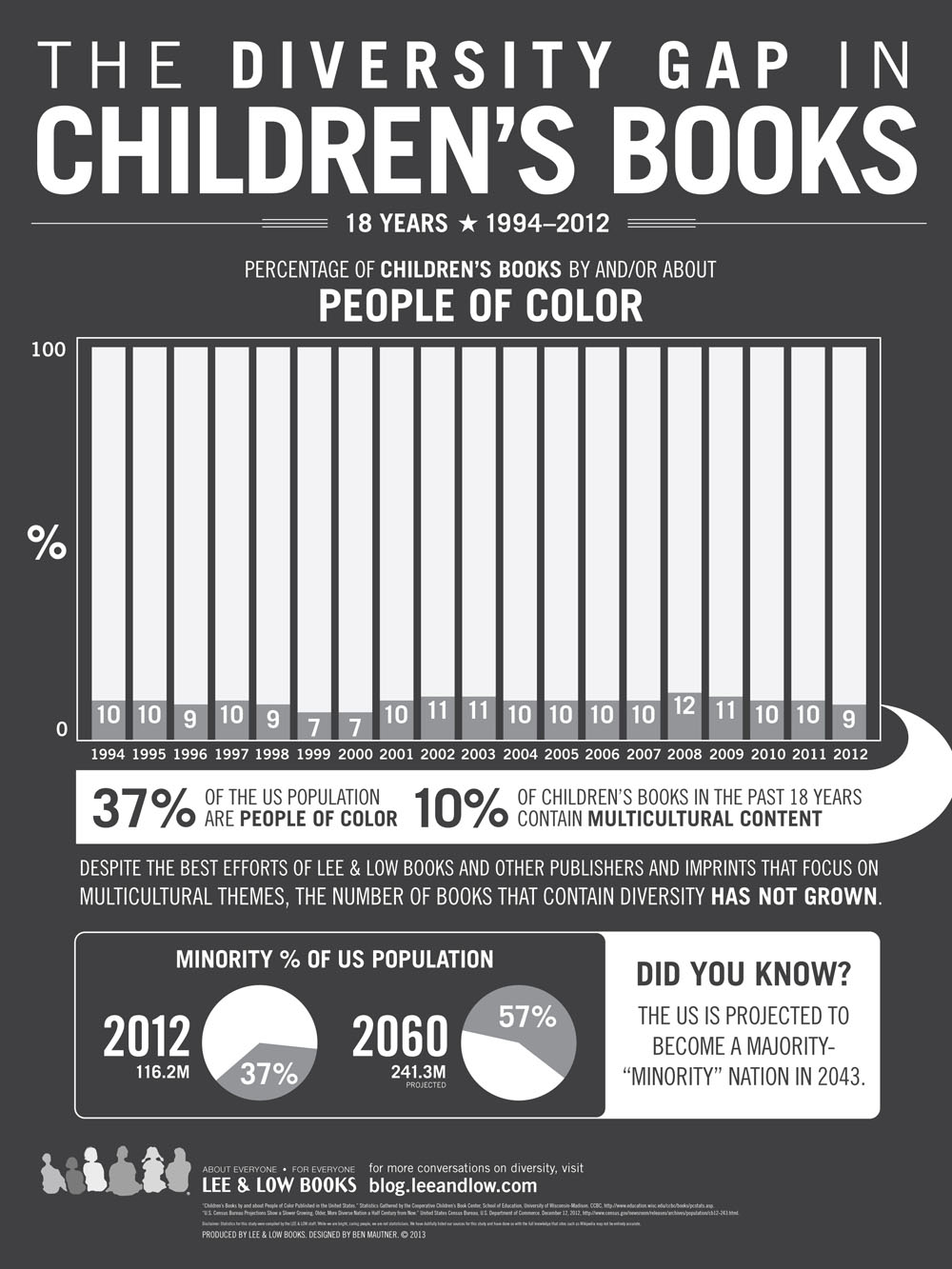 The publisher Lee and Low recently mobilized social media (through the nifty infographic featured) to jumpstart a discussion of diversity in children’s literature.

No surprise to anyone who is paying attention, while the US continues to undergo a significant demographic shift, diversity in children’s books is not reflecting what we the people look like today.

When we grow up not finding ourselves represented in popular media and educational curricula it becomes just a little harder to creatively imagine our futures, to explore our identities, to try on different ways of being; all of which are essential aspects of development.

Shame thrives in invisibility and silence. This is why representation is a critical aspect of diversity work.

But we need to also be mindful of how easily a complicated idea like diversity becomes code for one flattened out thing. That thing is usually the visual representation of race. As authors and educators, editors and publishers, we need to notice how this is missing the forest for the trees.

So as publishers start identifying even more specific ‘diversity markets’ and begin to make editorial “requests” to meet them, it seems like a good time to consider both the forest and the trees, and think about whether there’s a way to tend to both.

To accomplish this we need to think not only of diversity but also of inclusion.

In theory, diversity should refer to the range of varied experiences and ideas represented in a book, or more broadly in a publisher’s catalog.

But all too often diversity becomes code for visual representation of races other than white. One reason for this is that saying diversity when we mean race avoids calling out the publishing industry’s systemic racism, something most authors (who want to be published by this industry) are understandably uncomfortable doing.

When talk of diversity expands beyond race it still ends up looking very much like a checklist of compartmentalized identities. Can we get a child in a wheelchair? Check. Can the doctor be African American, and a woman? Check and check.

Representation matters, so this kind of diversity may have meaning, but as author and illustrator Maya Gonzalez pointed out so well in a recent post on First Voice multicultural children’s books, neither the characters nor the books guided by the checklist approach resonate in the same way with children.

There’s a difference between representation and diversity; that difference matters and needs to be talked about. For me, this is where inclusion comes in.

Inclusion, as a value and a writing practice, isn’t about representing as many different things as possible. Instead the goal of inclusion is simply that readers find a space for themselves in our stories, and that they can bring all of who they are to the reading experience, or at least as much of who they are as they want or can.

For children, it’s the difference between opening a book and seeing someone who looks like you – understanding that this is the character your meant to feel connected to because of that one visually represented thing you have in common – and falling into a story as you are.

Diversity, as it’s often practiced, teaches children to compartmentalize their experiences of, say, race or gender or class. Inclusion creates a space for them to explore not only multiple parts of their experience but also how those experiences are woven together in their bodies and lives.

It’s the difference between having to check a box or fill in a blank in response to some question about yourself. Whenever possible, particularly with young kids, I would say we want them to fill in blanks, not check boxes.

Writing inclusion then, means leaving spaces, rather than adding boxes.

Thinking about diversity and inclusion should not be an either or proposition. We need both, desperately. We need more representation, not only of race, but also of gender and bodies, ideas and experience. As Gonzalez writes, we need more First Voice literature that engages all children and reflects the communities and cultures our children actually live in, which are never as monochromatic or monotone as so much children’s literature appears to be.

Writing inclusion, then, is about creating spaces where children can learn about and across differences, spaces where we learn about both what makes us unique and what connects us to each other.

Cory Silverberg is an educator and writer. He is working on a series of inclusive children’s books about sexuality and gender for Seven Stories Press. The first, What Makes a Baby, was released in May 2013. He can be found online at sexuality.about.com, where he writes about sexual education, culture, politics, and health.

book publishing, children's literature, diversity, inclusion, minorities
Previous Post Guest Voz: Play-by-play of the Latino athletes who have fumbled at being role models
Next PostVideo: Empowering people with a simple tool to search, compare and be inspired by constitutions the world over

Guest Voz: Play-by-play of the Latino athletes who have fumbled at being role models
2 Comments
Video: Empowering people with a simple tool to search, compare and be inspired by constitutions the world over