Latina Lista: News from the Latinx perspective > Columns & Features > BlogBeat > Migrant or refugee? Why it matters which word you choose

Migrant or refugee? Why it matters which word you choose 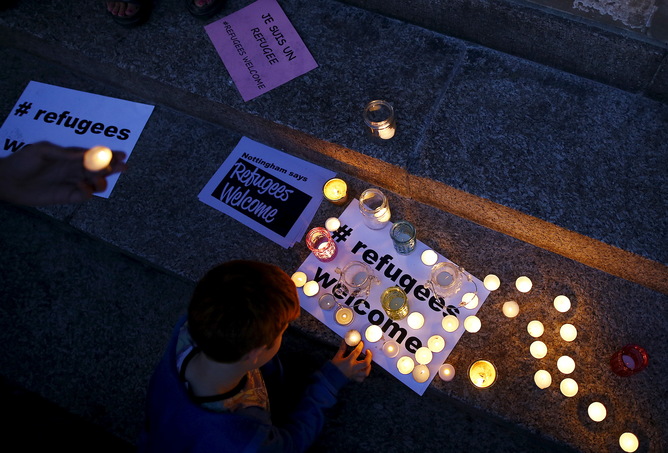 By Charlotte Taylor
The Conversation

Across Europe, a debate is raging about how to describe the thousands of people escaping war and turmoil in their own countries and making the journey to safer places. Are they refugees or migrants? The question is important: since European leaders have been justifying inaction over their plight by dismissing many of them as “economic migrants” who are less deserving of help.

Al-Jazeera has made a firm decision on this issue, announcing that it will stop using the umbrella term “migrants” when referring to the refugee crisis in the Mediterranean.

By choosing the term “migrant” over “refugee” (where the latter would be accurate), the choice denies the person their internationally recognised human rights, under the UN Refugee Convention.

But Al-Jazeera also noted that the very meaning of the word “migrant” was changing. What was once a basic description has come to carry negative connotations.

This kind of semantic degrading is common for words relating to controversial topics. We need only think of the endless cycle of terms used to describe people with disabilities, which often develop into insults and are eventually replaced.

In the early stages of a meaning change there is a tendency for people to resist the new interpretation, by claiming that they are using the dictionary definition. But dictionaries do not merely define words – they also describe how they are used. If a negative meaning develops this will be listed. For example, the definition of “villain” has shifted from meaning someone of low-born status “villein”, to the current understanding of evil.

At any one moment in time there are a range of terms available to describe human migration. The use of one name over another involves a choice and also carries information about the speaker’s opinion towards those they are describing.

For example, when people talk about “expatriates” or “expats”, they are often discussing affluent people, who have moved to another country. As Mawuna Remarque Koutonin argues, they are usually from the same country as themselves and often white.

British nationals constitute the second largest group of European foreign born residents in Spain. Most moved there looking for a better quality of life, enabled through the lower cost of living. They are “economic migrants”, but this term is not used to describe them in the UK. Instead it is most commonly used to refer to people moving from less affluent countries, both inside and outside the EU.

One way we can demonstrate how terms have specific geographical associations is by noting which words occur most frequently alongside them. If we look at the use of words relating to migration in contemporary American English we see the following sets of associations for six of the most frequent naming choices:

Words most commonly associated with six of the most frequently used naming choices.
Corpus of contemporary American English

As the table shows, the word “expatriate” co-occurs with “American” and “British”, while “immigrant” does not. The nationalities occurring simultaneously with the word “immigrant” are “Mexican” and “Chinese”. And the most frequently co-occurring word is “illegal”, which also occurs with “migrant”.

Naming is a choice which reflects not just a process, but a view of that process and the people involved. This becomes yet more evident when considering the terms “immigrant” and “emigrant”. Which could be dismissed as simply relational antonyms, reflecting two perspectives of the same process.

However, looking at an older version of American English we see that while the use of the name “emigrant” has decreased over time, “immigrant” has increased.

Historical changes in the use of the words ‘immigrant’ and ‘emmigrant’.
Corpus of Contemporary American English

There are differences in the meanings of the words used to describe migration and they are largely in interpretation. But in the end, what is in a name? Does the choice of one over another make a difference? As a linguist I am bound to say yes, but in the case of migration the choices made have very real implications.

The expression of particular attitudes by powerful voices will have an effect on the attitudes of others.

So when the Australian government promotes the names “illegal arrivals” or “illegal maritime arrivals” to refer to those seeking asylum, there are consequences.

The Associated Press dropped the term “illegal immigrant” in 2013 and The Guardian has similarly questioned its use of the term.

When people are deemed “illegal” – particularly by officials – it erases our shared humanity. Things that are shared are discarded in order to highlight only differences – “they” are not like “us”.

That makes the debate over the “right” term to use in relation to human migration controversial. Naming choices reflect differing attitudes and can have detrimental consequences.

Charlotte Taylor is a lecturer in English Language and Linguistics at University of Sussex This article was originally published on The Conversation. Read the original article.