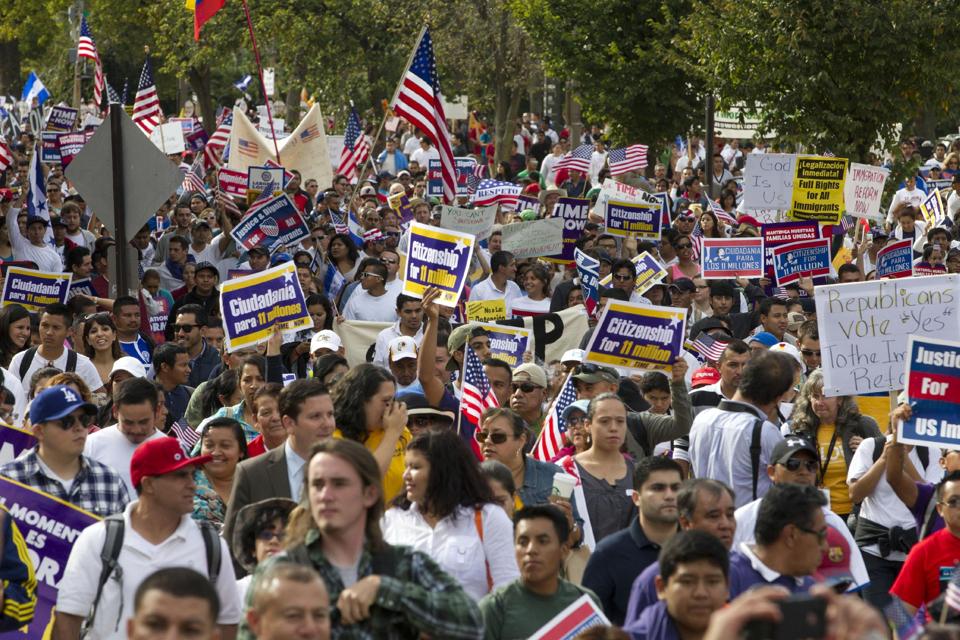 On October 8, thousands rallied at the National Mall in Washington, D.C. then marched to the Capitol demanding that Congress pass comprehensive immigration reform immediately. A reported 200 people got themselves arrested to underscore the urgency of the matter, among them union and community leaders and eight Democratic lawmakers including civil rights icon Congressman John Lewis.

When lawmakers finally do attend to immigration reform, a path to some form of legalization will be part of the equation. The Weekly Standard reports, “84 House Republicans have publicly voiced support for granting some type of legal status to the 11 million immigrants here in the country illegally, and 20 others have said they would be willing to consider it.” Legislation that regularizes the status of over 11 million undocumented individuals will be a long-awaited boon to immigrants and their families. But will they have the support they need to go through what will undoubtedly be a long and arduous process?

Immigrants without papers will be required to meet stringent requirements such as passing background checks, paying penalties and fines, and learning English, U.S. history, and civics. They will also have to deal with a complex application process that will require legal expertise and guidance.

Some people will have the wherewithal to hire private attorneys. Michelle Sardone, field support coordinator of the Catholic Legal Immigration Network (CLINIC), said however that those without the means will either turn to community-based organizations (CBOs) for help or attempt to file applications themselves. But, are immigrant-serving nonprofits ready to help millions of undocumented individuals and their families through the legalization process?

Constantino Diaz-Duran, a New York-based journalist, wonders himself. He worked as a legal assistant for Hogar Immigrant Services in the mid-2000s, helping Central Americans extend their Temporary Protected Status (TPS). Over 300,000 Salvadorans, Hondurans, and Nicaraguans were eligible for TPS – a status offered by the U.S. to immigrants affected by natural disasters in the region – and many turned to CBOs for assistance. As part of a team of three full-time attorneys, a few legal assistants, and an army of volunteers, Diaz-Duran sat with immigrants, going through checklists and forms.

“I would be surprised if they are ready, there are so many people,” said Diaz-Duran. “I do think immigrant-aid organizations need to start thinking of organizing and training volunteers. There will be a huge influx of people. I’ve thought of volunteering myself.”

Diaz-Duran’s concerns are well-founded. An Urban Institute study I co-authored identifies less than 700 nonprofits nationwide that provide some form of legal aid to immigrants. Their limited capacity could not possibly meet the demand for services when immigration reform finally passes. In Maryland, for instance, the ratio of nonprofits providing legal aid to immigrants to potential undocumented clients is 1 to 27,500. Alabama is a particularly stark case: two nonprofits provide legal services to the estimated 120,000 undocumented individuals in the state.

Sardone said CLINIC is preparing its 218 affiliates in 47 states for comprehensive immigration reform. The DC-based organization recently released a manual that offers recommendations from nonprofit immigration experts and “veterans” of the Immigration Reform and Control Act of 1986, which facilitated the legalization of close to 3 million individuals. It also includes lessons learned from the Deferred Action for Childhood Arrivals (DACA) program, which Sardone and some practitioners view as a test run of immigration reform.

“We are preparing our network,” Sardone said. “We’re telling them to start putting together plans, consider what it would look like in their areas to implement [comprehensive immigration reform].” For some, this means getting recognized and accredited by the Board of Immigration Appeals to legally represent clients. For others, it means finalizing fundraising strategies or incorporating volunteers.

Other networks are also laying the groundwork. Marita Etcubanez, director of programs at the Asian American Justice Center, points to a convening earlier this year by the Fair Immigration Reform Movement and the Center for Community Change, which brought together immigration advocates from around the country to share experiences from past reform legislation, as well as to discuss ramping up organizational capacity to meet an anticipated surge in demand for assistance and legal representation.

“There is a great deal to do to prepare, and we will have to work with immigration legal service providers, legal aid groups, other advocacy groups and community-based organizations because we know people will be seeking assistance wherever they can,” said Etcubanez. “We will also have to do widespread outreach and education so that our communities are aware of the changes to the law, have good information about what is available and who is eligible, and know where they can find help.”

Jeanne M. Atkinson, executive director of CLINIC, recalled her experience as a law intern working with immigrant communities after the passage of immigration reform in 1986. “Back then, there was a minimal number of agencies and limited technology,” she said. “We jumped in a minivan, drove to local community and health centers, wherever immigrants were, put up our sign, and provided information to people.”

It’s a different world now. There are a whole lot more CBOs working together to prepare for immigration reform. But in 1986, the number of undocumented immigrants was estimated at 3.2 million. Today there are more than 11 million.

Atkinson says nonprofits will face many hurdles. “The biggest issue is funding, they need the money to hire volunteer coordinators and other staff and to upgrade their technology.” She is nonetheless pleased with the preparation nonprofits, their networks and their community partners are taking. “We’re getting ready.”

Immigrant-serving groups better get ready. Comprehensive immigration reform will happen at some point and there will be millions who will turn to community-based nonprofits for help. Fi2W is supported by the David and Katherine Moore Family Foundation and the Ralph E. Odgen Foundation.

Erwin de Leon is a Policy Researcher and writer based in Washington, DC. He writes on immigration, LGBT, and nonprofit issues. You can follow him on Twitter at @ErwindeLeon.