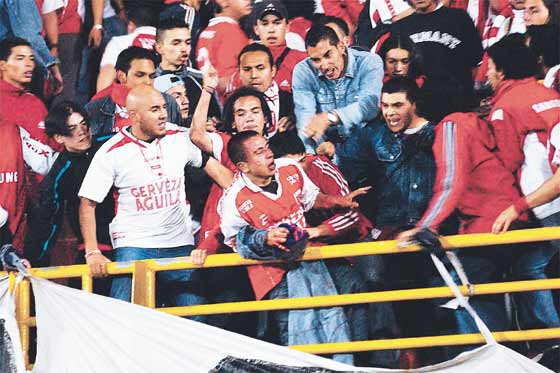 The director of Argentina’s federal police has received a death threat believed to be from one of the country’s “soccer mafias” — violent gangs that control the sport and have deep connections to the police, criminals and politicians.

A note written on a sports newspaper recently arrived at the house of Roman Di Santo, reported La Nacion. It read “Di Santo we will find you 5H” — the code referring to the number of the apartment where the police boss lives.

The authors are believed to be members of a soccer gang or people who benefit from their illegal dealings with such a group, including law enforcement officers, police sources told La Nacion.

It was no coincidence that the threat arrived within a month of the arrest of two officers from the Sporting Events Security Division during an investigation into the links between the soccer gangs and police, they said.

“This is not going to scare me, far from it,” said Di Santo. “We are going to keep fighting and keep bringing the culprits to justice.”

According to one Argentine journalist who has spent years investigating football corruption, the barras get up to 30 percent of transfer fees and 20 percent of players’ paychecks, reported the Guardian in 2011.

Corruption is a major problem in Argentina and the gangs are believed to have entrenched links with politicians and police.

“The barras bravas are mafias organized around businesses that include the club officers, politicians, judges and the police,” Graciela Muñiz, the Deputy Ombudsman for Buenos Aires told Inforsur Hoy last December. “A single phone call from a politician to a judge is enough to get [a] case filed away.”

Last year 11 people died in violence related to the “soccer mafia,” warned Argentina NGO Let’s Save Football, which was set up to fight corruption in the sport.

An international beauty pageant where everyone's pet cause is the environment
Comment
Intrn'l Video: Mexico's indigenous suffer a racism hard to ignore — and change