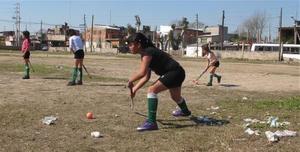 BUENOS AIRES, ARGENTINA – Lorena Oliva, a mother in her 40s, sits on a mound of earth in a field littered with trash. She doesn’t take her eyes off her 10-year-old daughter, Milagros, at field hockey practice.

Holding a field hockey stick, the girl runs from one side of the field to the other practicing with her teammates, who are also her neighbors in an underprivileged suburb of Buenos Aires, Argentina’s capital. As the sun beats down on the girls, Milagros comes over to her mother throughout practice to drink from a water bottle that she keeps cool in the shade.

Milagros plays field hockey in Lomas de Zamora, a municipality an hour bus ride from the capital. Her town has one main street, flanked with smaller, narrow streets with houses precariously erected one after the other, like a giant labyrinth.

Every Saturday, Oliva leaves her house at noon with her daughter and they walk for a half hour to the open area where El Puente Posible, a civil society association, organizes a field hockey program. The organization, whose name translates to “The Possible Bridge,” aims to give children from disadvantaged areas the opportunity to develop sports skills.

“She really likes to come,” Oliva says of her daughter. “More than going to school. I think that the sport helps her in everything.”

And Oliva always attends the practice too in order to ensure her daughter’s safety.

“I always accompany her,” Oliva says. “There are other mothers who leave them alone, who make the girls come alone. I, no.”

Oliva, the mother of seven children, says her eighth child died this past year at 1 month old. She pauses as if she is going to stop speaking but then continues. She adds that her husband is in prison for drug trafficking. She says she does everything she can to keep Milagros, her youngest daughter, safe.

“I am afraid like everyone,” she says. “The fears always exist. In school, I tell her to go to the bathroom during recess. I don’t want her ever to leave the classroom alone. That she notices in the street that no one follows her and that if someone follows her more than two blocks, she gets running.”

She says the area is dangerous for girls.

Oliva says that in addition to organizing field hockey practices and games, the program also arranges chats for the girls ages 11 and older about these issues. Topics range from gender-based violence to sexuality to personal care.

“Starting in the coming year, when she is 11, my daughter is going to be able to go to these chats,” Oliva says. “They are very good. Meanwhile, the sport also does her good.”

El Puente Posible convenes young and teenage girls in disadvantaged areas to teach them how to play field hockey in Argentina, where sports are usually a domain for boys. After practice, the program organizes talks for the older girls about issues ranging from domestic violence to sexual and reproductive health. Using sports as a tool for social inclusion, the program also links the girls with local prisoners, who repair their hockey sticks and make them gifts. This is especially helpful, as funding its sports programs is a challenge for the nonprofit organization.

Girls in Argentina play volleyball, basketball or handball in school. In recent years, field hockey has become more popular after the international success of the Argentine women’s team, “Las Leonas,” the silver medalists at the 2012 Olympics. But girls and women don’t have the same space to play and develop sports skills as men do with soccer.

El Puente Posible, created in 2009 by young professionals, aims to change this. Seven coaches in its seven branches in Lomas de Zamora offer field hockey to some 500 girls and adolescents. They hold practices on Saturdays and once during the week as well as organize competitions between the different branches or with other clubs in the area.

Mariano Martín Almaraz, one of the founders of El Puente Posible, says that the idea to create the nonprofit organization emerged after he and fellow classmates studying sociology at the Universidad de Buenos Aires noticed the underlying gender issue in the lack of promotion of sports among underprivileged women.

“We were investigating gender, sports and social classes,” he says. “It’s to say we were studying why this happened that girls in socially disadvantaged neighborhoods didn’t receive the same offer of a sport, that yes the male child received. It was a cultural question tied to gender.”

For Evelin Fecter, 14, the field hockey program offers her the chance to play the sport that she has seen many times on TV during Las Leonas games.

“I have seen this sport on the television, and I didn’t know where they played it,” she says. “Now that I play, I wake up and I think how great that I have to go to practice.”

But the members of the nonprofit organization are realizing that the girls – even if they have access to field hockey – don’t always receive the same support from their parents to play sports as their male counterparts do.

“It is not guaranteed that because they play hockey they are going to have the same support that the parents give to their male children,” Almaraz says. “The women many times remain caring for their younger siblings. If a male child plays soccer on the same schedule and you have to choose who is going to go out and who is going to help in the house, it is the girl child who is obligated to stay.”

Josefina Chouhy, a coach for El Puente Posible, says the organization needs to make a greater effort to encourage girls who have dropped out of the program because of problems at home to return to the sport.

“I note that they tend more toward the woman staying in the home,” she says. “Many times they are in their houses for some problem. And it’s a matter of going and telling them to return, and they return. But you have to go. In the future, we want to do visits to the houses.”

El Puente Posible uses the enthusiasm that field hockey generates among the girls to also arrange chats about gender issues after practice for the older players. The discussions last for an hour about topics selected from a survey that the girls complete about the issues that affect them. Fifteen students from varying majors at the Universidad de Buenos Aires lead the chats.

One of these students is Cecilia Carbó, who studies social work. She says that the objective of the chats is to give the girls tools to avoid social mistreatment, violence and teenage pregnancy.

“The idea is that it helps them so that no one hits them, so that they know what their rights are as adolescents, like, for example, to study or to choose their partner,” she says. “The objective is that the girls recognize themselves as legal subjects, in a context in which many times they are socially vulnerable.”

Carbó says that one popular exercise is role playing. For example, a girl playing a male character waking up in the morning has the option to ask for breakfast, to make his own breakfast or make breakfast for his wife and children. The girls playing this role have to choose what suits the male role best and, in doing so, reveal gender stereotypes that the group can then address.

“They believe that if the man doesn’t do things in the house, it’s because he’s lazy,” Carbó says. “It is very naturalized that the man is lazy and that it is the woman who does things in the house. That is deeply entrenched. The men are also the ones who go out to rob. That also comes out during the role-playing game.”

Carbó says that this contact with the girls gives her and the other students a more precise look at the reality in which they live.

“I learn more than the girls,” she says. “I learn from the view of the other, how the other lives. I can understand through academic knowledge, but no one better than them in order to learn how they live. We learn a lot all of the time from them. It is a continuous exchange.”

Outside the organization, Almaraz teaches history classes to prisoners in the jail in Lomas de Zamora. During El Puente Posible’s first year, some of his students in the jail offered to help him to repair the field hockey sticks that former players had donated to the program. At any point, half of the sticks the girls are playing with have been repaired by the prisoners.

Almaraz says that the women in the female wing of the prison then offered to make gifts for the girls for Christmas 2010, when El Puente Posible celebrated its first anniversary.

“The women made some very beautiful macramé necklackes,” he says. “They gave them to us in December, each one wrapped in a little package so that we could give them to the girls.”

“Hockey is going to help them when they leave,” Chouhy says.

Chouhy says that a lack of funding is the biggest challenge facing El Puente Posible, which never has set monthly funding. Currently, the group raises its funds through activities that it organizes, such as bingo or raffles. The El Puente Posible team are all volunteers.

Chouhy, a teacher who works nine hours a day, says that sometimes she has had to miss work in order to be able to fulfill her obligations to El Puente Posible. Almaraz says the same.

“The reality is that we live without any type of subsidy,” Chouhy says. “All of that is done without money. The only thing that sometimes comes to us as donations are sticks that people give us who have played hockey. No one receives a peso.”

As the morning practice ends, many of the girls pin purple ribbons to their T-shirts, a global symbol for the fight for women’s rights.