The question baffling two countries: What happened to August Reiger? 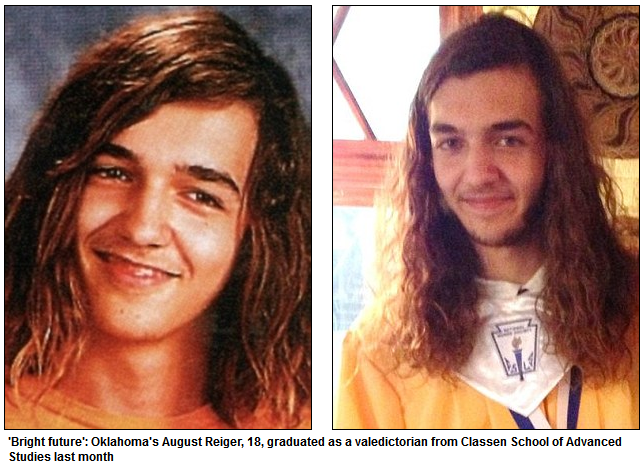 On June 16, 2013, 18-year-old August Reiger had the world at his feet — until he mysteriously vanished along an Ecuadorian mountain trail just a few yards in front of his family.

The Oklahoma City native, described by friends as “a bright young man,” had graduated a few weeks earlier as valedictorian of his advanced studies high school.

Reiger’s parents, Chris and Randa, were proud of their oldest son and decided to give him a graduation gift he wouldn’t forget — a trip to Ecuador. August had asked for a trip to a Spanish-speaking country where he could practice his love of speaking the language while learning more about indigenous cultures.

It’s August’s fluency in Spanish and his bright intellect that his parents are praying are helping their son cope with whatever situation he’s in now.

Who is August Reiger

With his shoulder-length brown locks and lean frame, August looks more like the musician he is rather than the scholar most know him to be.

Pedro Negrete, 19, an exchange student from Ecuador, who attended August’s school in 2011, remembers August being “a cool guy, maybe a little shy, but extremely bright.”

Although they did not take the same classes – Negrete was a senior and August was a junior at the time, he says, “I saw him frequently. He was very well known due to his intelligence and he had a music band.”

An International Baccalaureate Valedictorian, a National Merit Scholar and an Oklahoma Academic Scholar, August’s achievements in the classroom attracted the attention of the University of Oklahoma which awarded August a full ride scholarship starting this fall.

But it was August’s fascination with anthropology that captured his intellectual curiosity and the reason why he and his family found themselves spending Father’s Day hiking along a mountain trail in Baños, Ecuador.

Sitting on the equator, Ecuador is the smallest Andean nation. While 94 percent of the population speaks Spanish, Ecuador is home to indigenous cultures that, altogether, speak over 10 languages.

The country is packed with the most startling contrasts of scenery.

With its astounding biodiversity — Ecuador is one of 17 ‘megadiverse’ countries in the world —, home to an impressive historical legacy — awarded two World Heritage Site designations for its preserved Spanish style colonial architecture —, bustling highland markets and diverse mix of people, Ecuador serves as a unique example of a country building for its future from its past.

Baños, located in Central Ecuador, is a major tourist destination in the country. Known as the “Gateway to the Amazon,” Baños, home to popular thermal springs, attracts adventure enthusiasts from the world over eager to explore the nearby Amazon jungles or try their hand at one of the many outdoor activities the area offers.

For August and his family, Baños was the perfect starting point to get to know the country.

What happened to August

The day before August, his younger brother and parents were going to take a long-awaited 3-day tour of remote areas in the Amazon jungle, the Oklahoma family decided to take a short hike along the scenic trail that ran past their resort hotel. Towards the end of the hike, August elected to walk ahead of the group and meet them at the top of the trail.

It would be the last time the young man would be seen.

When August’s parents didn’t find their son waiting for them, they headed back to the hotel thinking their son could be there. He wasn’t. Twenty-four hours later, a frenetic search started.

According to a brief statement sent from the governor’s office of Ecuador’s Tungurahua province, Governor Lira De La Paz Villalva, “A special team of local authorities, including members of the armed forces, police, fire department and some volunteers were deployed in order to find Mr. Reiger.”

At the time of August’s disappearance, Chris Reiger, August’s father, told Oklahoma media that he felt August either fell from a steep ledge or was kidnapped.

“I thought he must have gone on. You couldn’t get lost. There’s only two trails. You can see the whole town… all you have to do is go down,” said the elder Reiger in a long distance phone interview at the time of the disappearance with an Oklahoma media outlet.

On June 24, August’s status was officially changed to ‘missing’ and President Obama declared the teen a “missing patriot.”

In the weeks since August’s disappearance, there have been three credible reports of a young man fitting his description. Given the fact that August is thin, fair-skinned and towers over the local population, authorities are taking the reports seriously.

Two of the sightings are from the same person and all three report the same circumstances, with the same people in which they saw a young man they believed to be August.

The witnesses said they saw someone who looked like August sitting in the back of a truck heading towards the Amazon jungle.

August’s parents, Chris and Randa, spent the majority of the summer in Baños searching for their son. Family members and friends also joined in the search flying down to Baños from Oklahoma and other states to lend their moral support.

The family can’t praise the efforts enough of the Ecuadorian government in trying to find August. In addition to offering a reward to anyone with information about August and promoting the story heavily in Ecuador’s media, the government also provided the Reiger family with police protection.

According to Cristi Reiger, August’s aunt who is serving as the family’s spokeswoman, authorities in Ecuador “have been extraordinary, incredible,” and she added that “they have told us that they will not rest until August is found.”

Though no ransom has been asked, kidnapping remains a leading hypothesis by officials since they feel that if he had fallen from a mountain ledge his body would have been discovered by now.

The country’s elite police unit that specializes in kidnapping, called UNASE, has taken full charge of the search operations.

The Reiger family also feels confident that August’s disappearance is a kidnapping.

“This is not unusual (for no ransom to be asked),” Christi Reiger told Latina Lista. “The elite group [UNASE] says that long waiting periods are common. It could take months before the first contact.”

However, some in Ecuador feel that authorities are wrong to focus solely on kidnapping as a motive for August’s disappearance.

Two journalists from Diario El Comercio, one of the oldest newspapers in Ecuador, agreed to talk to Latina Lista about August’s case on the condition that their names be changed, due to a new media censorship law that went into effect.

According to ‘Carla’ and ‘Felipe’, the government silences critics. “And Diario El Comercio is a very uncomfortable stone in (President) Correa’s shoes,” both said.

“August’s case is very sensitive. The reason is simple: It shows a reality that this government wants to hide. Ecuador has a strong drug trafficking problem, and that opens the door to violent crimes, such as kidnapping,” explained Carla.

Ecuador is flanked by Peru and Colombia, two countries with a long history of internal conflicts and robust drug trades.

Beittel explained that the United States has traditionally had close relations with Ecuador, yet tensions in the relationship have surfaced in recent years as the left-leaning government of President Rafael Correa has objected to U.S. influence in the region, which it has labeled “imperialist.”

Nevertheless, the United States is Ecuador’s largest trade partner and has extended trade preferences to Ecuador under the Andean Trade Preferences Act (ATPA) since the legislation’s enactment in 1991.

The ATPA provides unilateral preferential access to the U.S. market for certain products in order to reduce dependence on the illegal drug trade, although the Correa government in late June 2013 “renounced” its participation in the program.

Beittel pointed out that Ecuador is a major transit country for cocaine and heroin with its strategic location between Peru and Colombia.

The U.S. State Department estimates that up to 110 metric tons of cocaine travel through Ecuador each year, according to the 2013 International Narcotics Control Strategy Report.

The country is vulnerable to crime due to historically weak institutions, porous borders, and corruption. Domestic consumption of narcotics is a growing problem.

According to the Bureau of Consular Affairs of the U.S. Department of State, crime in Ecuador is a “significant concern,” and the northern border region of the country is considered risky.

“Due to the spread of organized crime, drug and small-arms trafficking, and incursions by terrorist organizations near Ecuador’s border with Colombia, the U.S. Embassy in Quito advises caution when traveling to northern Ecuador.

The agency also states that “at least 11 U.S. citizens are known to have been victims of kidnapping in this region in the past 11 years.”

Yet, Baños isn’t included in any travel warnings, and according to El Diario journalist ‘Felipe,’ Baños is not like the rest of the country.

“It is not heaven,” Felipe said. “But if I would pick Ecuador as a traveling destination, I would choose Baños, not Quito. That region is safer.”

Because Baños is considered one of the more secure areas of the country, both Felipe and Carla said that “it makes no sense to center all the search efforts on the kidnapping theory.”

The kidnapping hypothesis has a missing link, pointed Carla. “Nobody has asked for a ransom,” she said. “That is a red flag.”

Both journalists concur that “August’s case has opened a Pandora’s Box in Ecuador” highlighting the fact “We have a severe crime problem.”

Keeping the flame of hope alive

In the meantime, the family continues turning to anyone who can help.

The U.S. Department of State, the office of Congressman James Lankford (R-OK) and the office of Oklahoma Governor Mary Fallin, were “very active” in the past, Cristi Reiger said. “Not very much right now; however, our Embassy in Ecuador has been very helpful.”

One Facebook page in Spanish, created by Negrete and one in English by Barbara Rupert, who was part of Negrete’s host family when he lived in Oklahoma City two years ago.

“This is a way to raise awareness about August,” said Negrete. “Social media with social sense.”

Above all, it’s a way to keep hope alive.

Negrete posted a message to August:

“I would like to let you know that your family and friends love you and they want you back home.
Keep strong, with hope and patience. There is a lot of people looking for you. I am your friend.
And when all this ends and you get back to your family, contact me, so I can show you the good thing that Ecuador has to offer.”

“He will be found,” August’s aunt, Christi said firmly. “He will be back home.”

August’s parents have returned to the United States so their youngest son can start school — he will be a freshman at the same high school that August just graduated from as valedictorian — but remain in constant communication with Ecuador’s government waiting for that phone call that will end every parent’s worst nightmare.

“We will continue waiting to have good news,” Christi Reiger said.