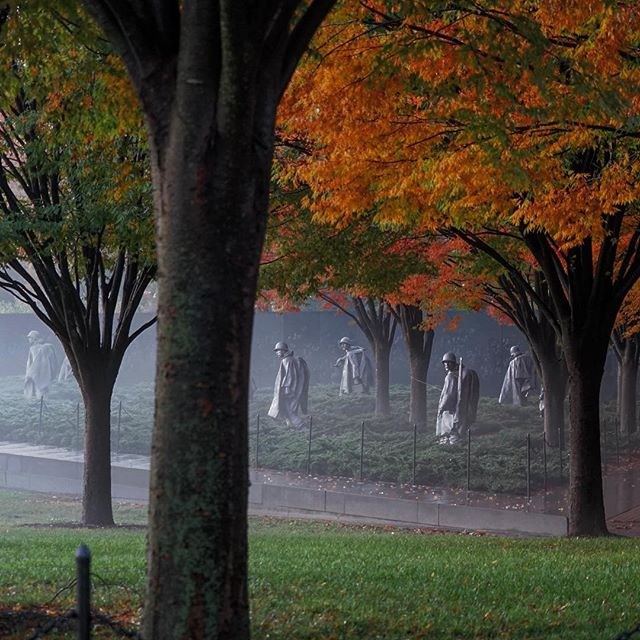 It is astounding to stop and consider the countless stories of heroism, service, and grit that forged our nation. From ordinary citizens to recognized historical figures, our collective history is filled with tales of extraordinary determination and human ingenuity, perhaps none greater than the stories of our armed forces.

Year-round, our national parks protect and interpret the hallowed ground, monuments, and memorials that stand in tribute to the incredible men and women who served our country. And each year on November 11, we take a moment to reflect on the demands and sacrifices of military life; we take time to say thank you to those, both past and present, who fought for this nation's freedom and ideals.
​
This Veterans Day, we invite you to explore the many national parks that commemorate our military history. We encourage you to learn about and seek out the stories told in some of these lesser-known national parks, and to visit (or re-visit) some of our most iconic ones.
​
Fort Necessity National Battlefield (Pennsylvania)
A young, 22-year-old Colonel George Washington built a circular palisaded fort in the summer of 1754, anticipating a confrontation with the French and Indians in the wilderness of southern Pennsylvania. Both sides suffered causalities on July 3 of that year, but the losses experienced by the British led Colonel Washington to surrender (the only time he ever surrendered to the enemy). Though an official declaration wouldn't mark the start of the Seven Years' War until 1756, Fort Necessity National Battlefield witnessed the opening action of the war.
​
Today, you can peek into the past as you explore a reconstructed fort in the clearing known as the Great Meadow, where Washington once prepared to engage in a clash of cultures between the British, French, and Indians.

Minute Man National Historical Park (Massachusetts)
The famous origins of "the shot heard 'round the world" trace back to April 19, 1775 in a beautiful area near Concord, Massachusetts – about 22 miles from Boston. Known as the location for the opening battle of the American Revolution, Minute Man National Historical Park interprets the tensions and clashes between the British troops and American colonists that ultimately led to the birth of a new nation.
​
Traipse across Concord's iconic North Bridge and ponder the energy that must have reverberated throughout the region as ordinary people dreamed of and strategized a new future for themselves.

Fort Stanwix National Monument (New York)
Fort Stanwix was constructed by the British in 1758 along the popular Oneida Carrying Place – a well-known trail connecting the Atlantic Ocean and Lake Ontario – for protection from French attacks in the area. The British abandoned the fort in 1774 and in 1776, amidst the American Revolution, American troops arrived to repair and garrison the fort.
​
At Fort Stanwix National Monument, you can explore an important site of the American Revolution – not just for the military history entrenched among the wooden planks of the fort, but also for its importance in helping forge a united nation. Here, soldiers from 13 different states worked, fought, and served together, building unity and a sense of national identity.

Perry's Victory and International Peace Memorial (Ohio)
At dawn on September 10, 1813, on South Bass Island in Lake Erie – located northwest of Sandusky, Ohio – Master Commandant Oliver Hazard Perry set sail with a squadron from Put-in-Bay after spotting six British vessels in the morning's light. The sequence of events from this day, known as the Battle of Lake Erie, and those following Perry's decisive victory on the lake were the most instrumental triumphs during the War of 1812.
​
Perry's Victory and International Peace Memorial stands in honor of those who fought that day and during the war, and commemorates the long-lasting peace between Britain, Canada, and the U.S.

Fort McHenry National Monument and Historic Shrine (Maryland)
The history of this unique national park isn't rooted in just one war, but instead spans an era from the Revolutionary War to the World Wars. The earthen star fort, originally know as Fort Whetstone, was constructed in 1776 as the citizens of Baltimore feared an attack by British ships. The iconic masonry walls we see today were built between 1798 and 1803, as part of an effort to foritfy the coast.
​
Fort McHenry, however, is best known for its role in the War of 1812, when it was attacked by the British in mid-September of 1812. This was the event that went on to inspire the composition of Francis Scott Key's "The Star-Spangled Banner." Though the fort continued to serve as a training ground, prison, and eventually a general hospital through the years, its notoriety is closely linked to the events of the War of 1812.
​
Fort McHenry National Monument and Historic Shrine is the only national park in the system that holds both the designation of a national monument and a historic shrine. It continues to be an impressive place to take in living history, weapons demonstrations, and witness fireworks commemorating Flay Day and Defenders' Day.

Bent's Old Fort National Historic Site (Colorado)
An expanding frontier and increased trading opportunities led William and Charles Bent to build an adobe fort along the Santa Fe Trail in 1833. The fort quickly became a hub for a booming trade empire, and a site that brought together the different cultures of the region, including Mexicans and the Cheyenne and Arapaho tribes. Its strategic location between Missouri and the Mexican settlements on the trail allowed the fort, known as the "Castle of the Plains," to serve as a desirable place to replenish supplies, repair wagons, and enjoy a good meal with company.
​
Because of disaster and disease, the fort was abandoned by 1849.
​
In 1960, Congress declared Bent's Old Fort National Historic Site to interpret the history of the region and the fort's role in opening up the country's new frontier. Based on diaries, paintings, and archeological excavations, the fort was reconstructed in 1976. Today, you can imagine the lives of the traders, travelers, and tribes that interacted here.

African American Civil War Memorial (Washington, D.C.)
One year after the start of the Civil War, African Americans began enlisting to fight. Prior to the passage of the 2nd Confiscation Act and Militia Act in July 1862, they had not been permitted to serve in the military, but the new law facilitated the creation of the United States Colored Troops. Over 200,000 soldiers, across the 175 regiments of the USCT bravely fought in the Union Amry, ultimately helping win the struggle for freedom.
​
President Lincoln noted, "Without the military help of the black freedmen, the war against the South could not have been won." Today, you can reflect on their struggle and bravery at the African American Civil War Memorial where the names of the officers and men of the USCT are inscribed on the walls. The sculpture itself depicts three infantrymen and a sailor, with the face of the Spirit of Freedom watching over them.

Fort Point National Historic Site (California)
Construction on the fort known as the "pride of the Pacific" began in 1853 and was completed by 1861. Though the Army mounted guns at the fort in anticipation of a Confederate assault on the Bay, the fort never came under attack. As many as 500 men were garrisoned here during the Civil War.
​
When plans for the construction of the Golden Gate Bridge began in the late 1930s, they included the demolition of this historic fortification. Thankfully, engineers soon recoginized not only the historic importance of the fort, but also its architectural value. Chief Engineer Joseph Strauss even created a special arch which allowed for safe construction of the bridge over the site.
​
Today, visitors can enjoy Fort Point National Historic Site and take in the bridge's steel arches and the fort's the arched brick casemates that provide a stunning visual melding of the old and new.

National Mall & Memorial Parks (Washington D.C.)
Lovingly known as America's front yard, National Mall and Memorial Parks is a powerful place to honor the legacies that forged our national history, including the valor of our military men and women. The 1,000 acres of parkland that make up this national park are home to the World War II Memorial, the Korean War Veterans Memorial, and the Vietnam Veterans Memorial.
​
Though stunning at any time of day, exploring the memorial at dawn and dusk provide time for quiet reflection and appreciation of the sacrifices made for our freedom.

This Veterans day, be inspired by the countless veterans who served this great nation. Be humbled by their stories, service, and sacrifice. And be sure to give thanks for the legacy they helped shape.
The stunning photos included in this piece were shared by national park fans, just like you. Each one captured unique perspectives, details, colors, and moments that showcase the power and beauty of these national parks. As you set out to explore units across the National Park System, be sure to share your memories with us by using #FindYourPark and #EncuentraTuParque, and be sure to tag us (@GoParks) on Twitter and Instagram.

Crowdfunder: Saving Vietnam — Puerto Rico
Comment
I was attacked by Trump supporters on Twitter for tweeting #SNLDumpTrump. Here's what I learned.